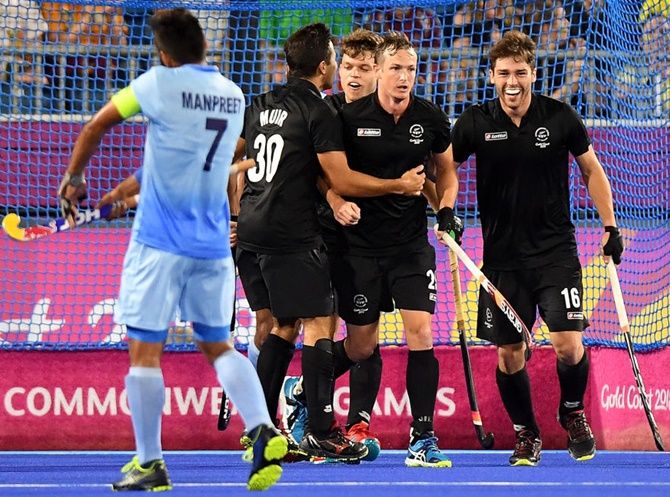 IMAGE: Hugo Inglis is congratulated by teammates after scoring New Zealand’s opening goal against India in the men's hockey semi-finals at the Commonwealth Games on Friday. Photograph: Bradley Kanaris/Getty Images

Two early goals put paid to India’s hopes of making the final in men’s hockey at the Commonwealth Games as they went down 2-3 to New Zealand in the semi-finals on Friday.

Hugo Inglis, Stephen Jenness and Marcus Child scored for the Kiwis while Harmanpreet Singh reduced the margin, scoring from a penalty stroke and penalty-corner, which came in the dying minutes.

In the final, New Zealand will meet the winners of the second semi-final between Australia and England. India failed to capitalize on the many chances that came their way early in the match and found themselves down two goals in the first quarter.

First, against the run of play, the defence was caught napping as Hugo Inglis got in the clear and sent a rasping reverse hit that beat goalkeeper P Sreejesh hands down.

Then Stephen Jenness scored from nowhere. With his back to the goal, he tapped the ball behind and in between the Indian goalkeeper’s feet to put New Zealand 2-0 ahead going into the second quarter.

With five minutes to go for half-time India were awarded a penalty- corner after Sumit was fouled by New Zealand defender Arun Panchia when well-placed inside the circle. Following the resultant set-piece, came a penalty-stroke and captain Harmanpreet Singh made no mistake with the conversion.

A breakthrough into the circle by S V Sunil gave India a chance to restore parity but Akashdeep failed to tap home from close. New Zealand increased their lead seven minutes into the third quarter. Goalkeeper Sreejesh blocked Kane Russell’s flick from a penalty-corner, but he was unable to stop the Marcus Child’s shot off the rebound from his pads.

Down 1-3 going into the fourth quarter, the Indians launched an all-out attack but were unable to make an impression on a crowded New Zealand defence which gave little away.

With two minutes to go for the hooter, India withdrew goalkeeper Sreejesh for an extra forward and the move it paid off. They forced their eighth penalty-corner and Harmanpreet flicked home to make it 2-3.