India squandered a two-goal advantage and conceded a last-minute goal to lose 3-4 to Belgium in the final of the Champions Challenge I hockey tournament in Johannesburg on Sunday.

Striker Florent van Aubel caught the Indian defenders off-guard and scored the all-important winner for Belgium at the stroke of the hooter to not only hand Belgium the gold medal but also a maiden place in next year's Champions Trophy in Australia.

India, seeking to repeat their Champions Challenge title win of 2001, led 2-0 and again 3-1 before a late rally by Belgium saw them equalise 3-3 and then deliver the knockout blow in the last minute.

The Belgians came back strongly through Jerome Dekeyser's two outstanding field goals in 45th and 57th minutes, while Gauthier Boccard penetrated the Indian defence with a fine deflection in the 55th minute.

India had several chances of scoring but their strikers were off-mark and often got blocked by a number of Belgian defenders, falling back to crowd the circle.

India were unlucky not to have scored in the third minute when Manpreet Singh's deflection rebounded off the post.

India held sway after Raghunath converted a penalty corner with a low drag-flick in the 23rd minute.

Sandeep, adjudged the best player of the tournament, doubled the lead for India with a fierce drag-flick to the top right of the rival goal in the 39th minute before Dekeyser pulled one back in the 45th minute on a breakaway move.

Shivendra then dribbled in from right to flick the ball in behind the goalkeeper in the 53rd minute to score a beautiful field goal and hand India a 3-1 lead.

Then came a series of Indian misses and Belgian raids. Boccard pulled Belgium back with an opportunistic strike in the 55th minute and Dekeyser slammed in his second goal two minute later to level the scoreline at 3-3.

With scores tied, the match seemed headed for extra time when another breakaway move saw van Aubel seal win for Belgium in the final minute of play. 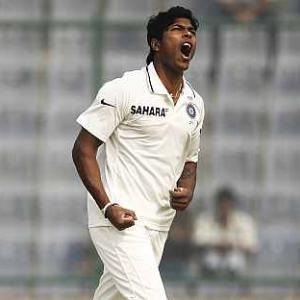 Yadav wants to be India's McGrath