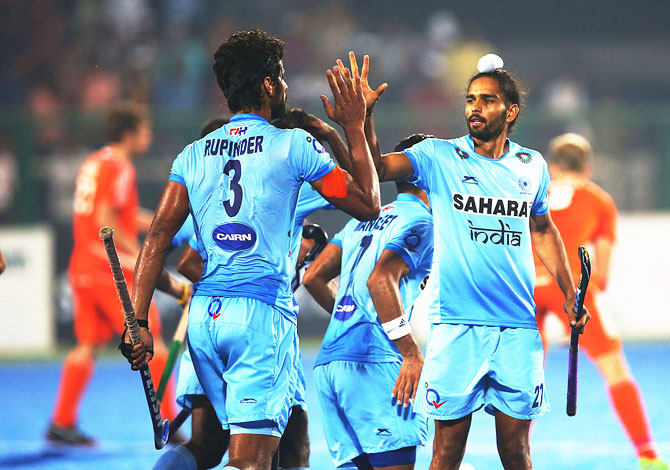 India dominated possession but their problems in defence and conceding late goals continued as they were held to a 2-2 draw against Great Britain in the Azlan Shah opener in Ipoh, Malaysia on Saturday.

The match started two hours behind schedule after the teams, who were warming up, had to scurry off the turf when lightening and heavy showers arrived in the afternoon.

After having maximum possession till the 2nd quarter, India finally took the lead in the 19th minute as Akashdeep Singh scored on rebound of a penalty corner.

But India’s lead was cut in the 25th minute when Tom Carlson equalised for Britain.

India again went up in the 4th quarter by another sublime field goal by Mandeep Singh (48th minute) but Britain managed to hold on and find the late equaliser through Alan Forsyth in the 52nd minute.

India survived a last-minute penalty corner that was awarded against them for an obstruction outside the circle.

The penalty corner was confirmed after the video referral by India, but British captain Phil Roper sent his drag flick wide to the right.

Great Britain launched the first raid in the ninth minute and Henry Weir took a reverse shot at the goal from the top of the circle, only for goalkeeper PR Sreejesh to pad the ball away.

Three minute later, India could have posed a danger to the British citadel when Akashdeep beat a defender guarding the circle with a shot that went straight to SV Sunil inside the scoring zone.

But Sunil failed to trap the ball and British goalkeeper Harry Gibson was not tested.

India were awarded their first penalty corner when Pradeep Mor's diagonal ball landed on a defender's foot in the circle.

The penalty corner shot could not be taken as the push was not stopped, but Manpreet Singh, captain for this match, picked up the ball on the 25-metre line and sent a firm drive into the circle.

Manpreet's shot was padded by the British goalkeeper and the rebound went straight to Akashdeep, who capitalised on the chance by beating the custodian with his flick that put India in the lead in the 19th minute.

The British team mounted an attack in the next minute, forcing India to pack the circle to thwart any danger. Great Britain were not to be denied the equaliser in the 25th minute when a fine foray by Ollie Willars split open the Indian defence.

Dribbling parallel to the goal-line from the right flank, Willars sent a pass to Carlson, who made the most of his fine positioning by shooting into the goal.

India had their second penalty corner cancelled on a video referral by Great Britain, who challenged the umpire's view of a defender carrying the ball.

When several replays could not conclusively establish if the ball had touched a defender's foot, the video umpire reversed the decision.

India reclaimed the lead in the 48th minute when Sunil relayed a narrow-angle pass from Manpreet on the left flank for Mandeep Singh, who deflected the ball past goalkeeper Gibson.

India's lead was short-lived as the determined British made the most of their 52nd minute attack even in a crowded circle.

The Indian defenders were not able to clear the ball, which was switched around four Britons before Alan Forsyth's flick beat Indian custodian Sreejesh.

India finished as a runner-up to nine-time champions Australia in the last edition of the tournament and Harmanpreet Singh played a crucial role in the team's success.

The spate of draws on the opening day continued when Japan rallied to hold hosts Malaysia 1-1.

Leading through an open striker by Tom Craig in the 32nd minutes, Australia were looking to bolster their position when New Zealand capitalised on a brisk breakaway.

The 20-year-old Newman, playing in his 11th international, made the day a memorable one with a deft shot that left the Australian defenders stunned.

New Zealand have brought a very young team to this tournament, leaving out all seven players of the national squad who are currently playing as professionals with European clubs.

Australia, nine-time winners of the Sultan Azlan Shah Cup, are using this tournament to rebuild their squad after the disappointing show in the 2012 Olympics at Rio de Janeiro.      Boosted by support from the spectator galleries, Malaysia took the lead through a penalty corner conversion by Razie Rahim in the eighth minute, only to see Japan equalise in the 40th minute penalty corner strike by Shota Yamada.

Japan could have clinched victory had Malaysian goalkeeper Kumar Subramaniam not charged forward to thwart Koji Yamasaki, who had dribbled in unmarked in the 56th minute.