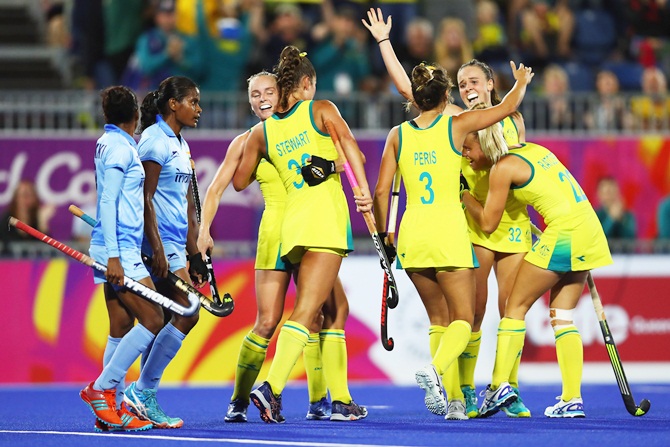 IMAGE: Grace Stewart is congratulated by her Australia teammates after scoring against India in the women's hockey semi-final at the Commonwealth Games on Thursday.. Photograph: Dean Mouhtaropoulos/Getty Images

India went down to Australia by a solitary goal in the semi-finals of the women's hockey tournament at the Commonwealth Games on Thursday.

Grace Stewart's goal in the third quarter was enough to take the home side through for a meeting with New Zealand in the semi-finals.

New Zealand got the better of England via the penalty shoot-out 2-1 after the teams were locked goalless at full-time.

India will play England in the bronze medal match.

Had goalkeeper Savita Punia not made a couple of good saves the margin of defeat would have been higher.

India started with a flourish and attacked the Australians in the opening minutes. A good through pass from midfielder Vandana found Rani Rampal in the clear at the top of the circle, but the latter delayed her shot and was dispossessed.

Immediately the Australians forced two a penalty-corners but without success.

A minute before the end of the first quarter India were lucky not to have conceded a goal thanks to goalkeeper Savita Punia who did well to block a stiff shot from Stewart. 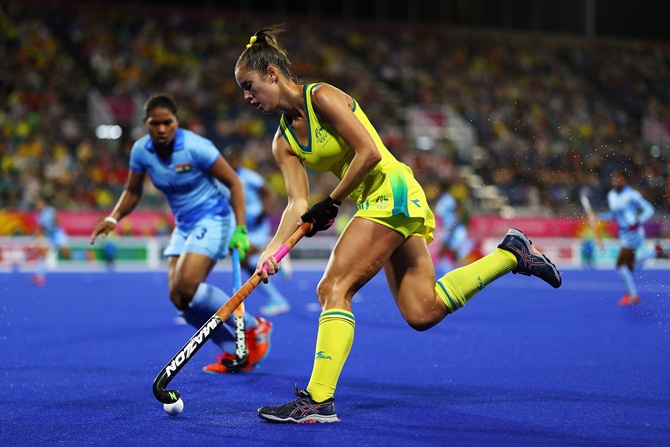 The second quarter was all about Australia attacking and India defending in numbers though no one had a clear look at goal before the teams went into half-time locked goalless.

Australia’s relentless pressure paid off seven minutes into the third quarter when Grace Stewart scored from a skirmish in the circle.

India forced their second penalty-corner in the third minute of the fourth quarter, but Gurjit Kaur messed up with the set-piece, unable to trap cleanly at the top of the circle.

Another one came India’s way soon after but Gurjit’s feeble hit was cleared by an Aussie defender.

India attacked from the flanks and stormed the Australian defence but were unable to splinter through.

In a last-ditch effort coach Harendra Singh took off goalkeeper Savita for an extra attacker. With three minutes to go Navneet Kaur failed to tap home a Monika cross from the right flank when well-placed and when captain Rani did not connect a through pass from Vandana Kataria it was all over bar the shouting. 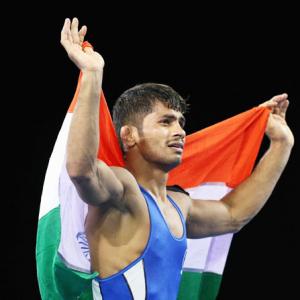 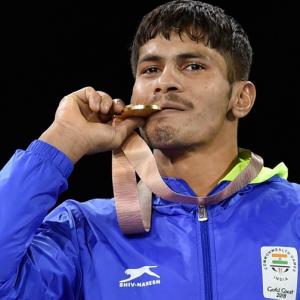