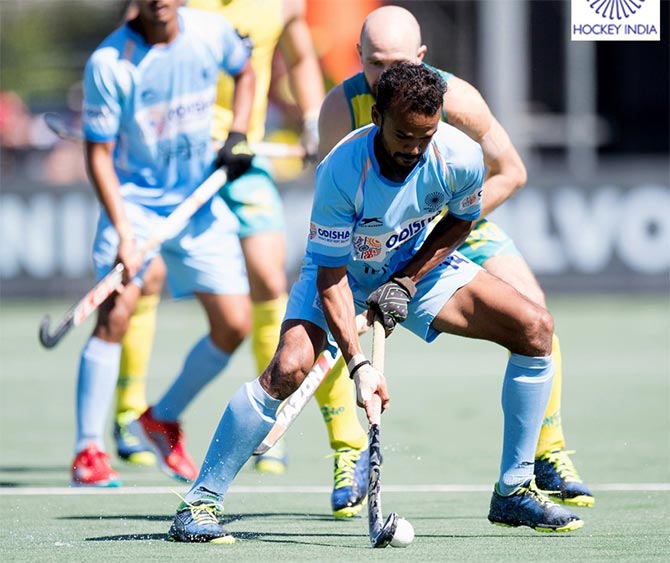 India's quest for a maiden Champions Trophy hockey title remained unaccomplished as they lost 1-3 to defending champions Australia via the penalty shoot-off in the final of the 37th and last edition of the prestigious tournament, in Breda, the Natherlands, on Sunday.

India came agonisingly close to securing their maiden Champions Trophy triumph, only to be denied by a valiant show by Australia goalkeeper Tyler Lovell.

The match went into the shoot-off after both the teams were locked at 1-1 in regulation time.

Te Kookaburra custodian produced a stellar show in the shoot-off, denying Sardar Singh, Harmanpreet Singh and Lalit Upadhayay while Manpreet Singh was the only scorer for India.

Australia, on the other hand, converted their first two efforts in the shoot-off through Aran Zalewski and Daniel Beale before Indian goalkeeper PR Sreejesh denied Matthew Swann and Tom Craig.

The Indians can take heart from the fact that they matched Australia for the entire 60 minutes, even dominated the proceedings for a better part of the game, but the strikers failed to utilise the numerous chances in front of an agile Lovell.

It was Australia who took the lead in the 24th minute through Blake Govers who converted their only penalty-corner.

India had better chances initially in the form of two back-to-back penalty-corners inside the first 10 minutes but they wasted both.

The Indians continued attacking and in the 13th minute, young Dilpreet Singh's hit was blocked by an Australian defender before it fell on the path of SV Sunil who failed to control the ball.

India secured their third penalty-corner in the 18th minute but Harmanpreet's flick was blocked by the Australian defence as another opportunity went abegging.

In the 24th minute, Sreejesh pulled off a brilliant save to deny Aaron Kleinschmidt, but from the resultant move Australia secured their only penalty-corner and Govers made no mistake to give his side the lead.

Just a minute before half-time, Sreejesh evicted a fine save from Zaleski's effort as Australia went into the breather leading by a solitary goal.

Three minutes into the third quarter, India earned another penalty-corner but it also failed to yield the desired result.

Manpreet was then denied by Lovell from close range after being fed by Harmanpreet's pass. But from the resultant move Vivek scored after getting a deflection from Manpreet as India levelled the score.

After that it was all India in the fourth and final quarter when Harendra Singh's men went for the kill.

But luck was not in their side once again as Mandeep's shot in the 45th minute was brilliant kept away by Lovell.

Lovell once again came to Australia's rescue in the 53rd minute, saving Dilpreet's shot from close range with his extended right foot.

Three minutes from the final hooter, Manpreet failed to get his stick to Sunil's pass from close range as match went into shoot-off, where Australia came out stronger.

While India had to be contend with their second consecutive silver medal, hosts Netherlands took away the bronze beating Olympic champions Argentina 2-0 in the third-fourth place match.

Belgium finished fifth after beating Pakistan 2-1 in the penalty shoot-off after both the teams were levelled at 2-2 at the end of 60 minutes.