World No. 1 Australia won the series 4-1 IMAGE: Harmanpreet Singh scored twice from penalty-corners in the concluding match of the five-Test hockey series against Australia, in Adelaide, on Sunday. Photograph: Mark Brake/Getty Images

Skipper Harmanpreet Singh's brace went in vain as India lost 4-5 to Australia in the final game and handed the five-Test hockey series 1-4 to the world No. 1 side, in Adelaide, on Sunday.

Australia were by far the better side as they controlled the proceedings in opening two quarters.

India were slow to get off the blocks and looked tentative.

The home side wasted no time in punishing India, with Wickham scoring from top of the circle with a fierce strike as early as the second minute.

The Indians failed to put pressure on the Australian defence and hardly created any chances in the opening quarter.

Australia doubled their lead in the 17th minute and again it was Wickham.

Lachlan Sharp stole the ball in the midfield and went past a few Indian defenders to set it up for Wickham, who slotted home from a one-on-one situation with India custodian P R Sreejesh.

India pulled one back in the 24th minute when Harmanpreet converted a well-executed penalty-corner.

But the Kookaburras restored their two-goal advantage seconds from half-time when Aran Zalewski scored from close range after Pathak made a double save to deny Anderson.

India came out attacking after the change of ends and reduced the margin to 3-2, Amit Rohidas scoring with a powerful shot from a tight angle.

Minutes later, Sreejesh made a smart save to keep out Sharp as Australia continued to put pressure on the Indian defence.

Australia extended their lead in the 40th minute when Anderson pushed in Daniel Beale's ball.

The Kookaburras continued to press hard on the Indian backline and from such opportunity, Whetton pushed home from close range to make it 5-2 in favour of the hosts.

The Indians responded immediately from the next move and Sukhjeet found himself at the right place to tap in a fine team effort.

In the final minute of the game, India secured a penalty-corner and Harmanpreet was in no mood to miss the opportunity, reducing the margin to 4-5.

But that's all the Indians could manage as there was hardly any time left for the equaliser. 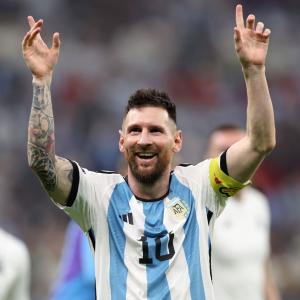