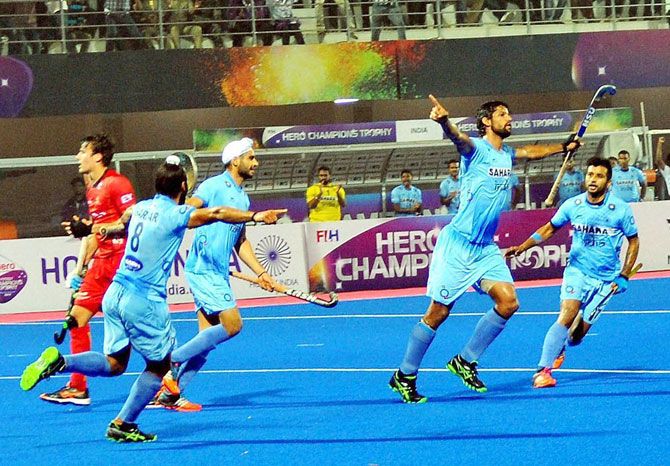 Indian players celebrate a goal against Belgium in the quarter-final at Champions Trophy at Kalinga Stadium in Bhubaneswar. Photograph: PTI

India entered the semi-finals of the Champions Trophy hockey tournament after a come-from-behind 4-2 victory over Belgium in the quarter-finals in Bhubaneswar on Thursday.

The hosts will face arch-rivals Pakistan for a place in the final, the latter scoring 4-2 upset win over eight-time champions The Netherlands earlier in the day.

In the other semi-final, World champions and holders Australia will take on Olympic champions Germany.

Pakistan, a three-time former champion, got the better of India on the last four occasions they have met in the tournament, all third-place play-offs, including at Melbourne a couple of years back.

However, India won the last meeting between the two rivals, in the Asian Games final in Incheon, South Korea earlier this year 4-2 on penalties, after the teams were locked 1-1 in the stipulated period.

India have only won one medal ever in the Champions Trophy, a bronze in 1982 at Amstelveen, when they beat Pakistan in the semis. 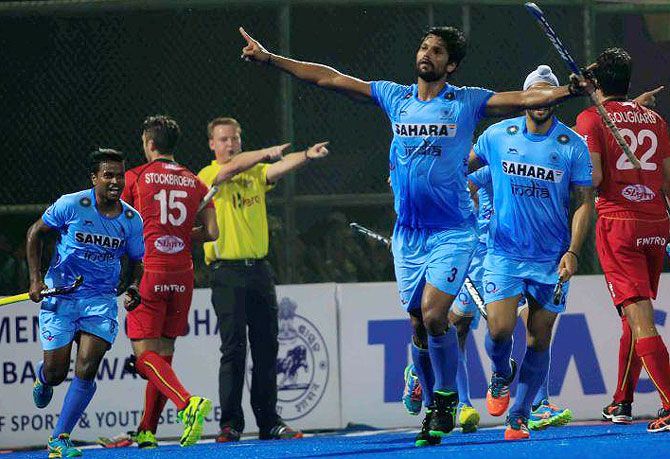 India produced an inspirational performance with a magnificent come-from-behind victory. It was a fantastic comeback after being down 0-2 within 18th minute courtesy goals from Felix Denayer (12th minute) and Sebastien Dockier (18th).

But the hosts, ranked ninth in the world immediately pulled one back in that very minute through Rupinder Pal Singh (18th).

SK Uthappa (27th) levelled the proceedings while Akashdeep Singh (41st) and Dharamvir Singh (49th) also scored in one of India's most famous victory in recent time.

By virtue of this win, India has also avenged upon their 2-3 defeat against Belgium in this year's World Cup at The Hague, Netherlands. 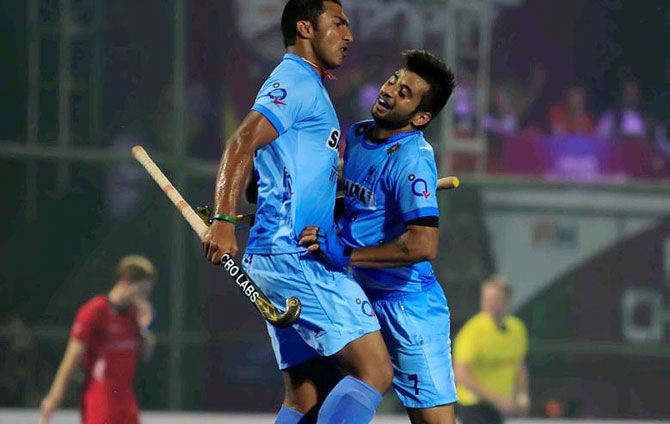 India were slow to get off the block as Belgium dominated the first quarter, with Denayer's drag-flick found the back of the net from their third penalty corner.

India did not have the best of starts in the second quarter as well three minutes into the quarter Sebastian scored with a lovely touch from Tanguy Cosyns pass.

Hurt by the two goals but buoyed by the 7,000 strong home crowd at the Kalinga Stadium, the Indian team bounced back strongly and went on the offensive, which resulted in their first penalty corner and Rupinder was at his lethal best to pull one back for the hosts.

Pumped up by the goal, India pressed hard thereafter and managed to draw level in the 27th minute when Uthappa was at the right place to neatly deflect home a V R Raghunath's delivery from outside the striking circle.

India continued to attack in numbers in the third quarter and their efforts resulted in their third goal. Akashdeep pushed home from close range after the ball landed in front of him post Sunil's feeble attempt. Dharamvir scored a fourth after being fed by skipper Sardar Singh.

Thereafter, India defended in numbers to thwart any danger to their citadel and they succeeded in their effort to dig out the victory, definitely a morale booster for Indian hockey.