India suffered a shocking defeat as Korea rode on captain Yang Ji Hun's superb hat-trick to script a remarkable come-from-behind 6-4 victory in their opening match of the U-21 Sultan of Johor Cup hockey tournament.

Down 0-4 at the breather, a valiant Korea pumped in as many as half a dozen goals in the second half to dash India's hopes at the Taman Daya stadium.

After dominating the opening period, India panicked and frittered away the four goal advantage within 12 minutes in the second half.

Mylaram Sampath Kumar opening the scoring for India as early as in the fourth minute, converting his team's first penalty corner.

Malak Singh (16th, 29th) two field goals tripled the scoreline and then Talwinder Singh (31st) made it 4-0 for the Indians just four minutes from the breather.

India will face fromidable Australia in their next round robin league match tomorrow, while Korea will take on Pakistan.

Contrary to the result, it was all India in the first half as they scored goals at regular intervals.

India earned its first penalty corner in the fourth minute from which Bangalore lad Sampath Kumar scored with a powerful dragflick that beat Korean goalie Jung sung Min all ends up.

Malak then tore apart the Korean defence and scored India's second goal in the 16th minute with a high scoop after trapping a rebound. He netted home another field goal to make the scoreline 3-0 in favour of the Indians.

The Indian colts kept up the pressure and their tactics bore fruit as Talwinder scored the fourth goal after latching on to a rebound to go into the breather with a comfortable lead.

But the Koreans were in no mood to give up without a fight and came out all guns blazing in the second half, which created panic among the inexperienced Indian defenders.

Captain Yang led from the front and scored Korea's first goal from a set piece just four minutes after the change of ends.

Yoon then deflected two successive freehits in a span of two minutes to reduce the margin to 3-4 which rattled the Indians.

Yang, once again came to the party and showed his prowess with penalty corners, converting another two to cancel out what once seemed to be an unassailable lead for India.

Shocked by Korea's brilliant fightback, the Indians tried hard to force their way back into the match in the next 10 minutes, but it was not to be as Korean custodian Jung Sung Min stood firm.

As expected India coach Mukesh Kumar, who is on his maiden assignment with the national team, is disappointed with the result and attributed the loss to inexperience and over confidence.

"All our players are playing their first international tournament and it showed in their body language, they were over-confident. I advised them not to be complacent in the half time but it did not work," he lamented.

"In fact, Korean defence did silly mistakes in the first half, the same we did in the second half," Mukesh said. 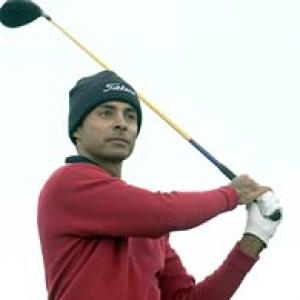