The crucial joint-meeting between Indian officials and the International Olympic Committee in Lausanne agreed in principle on a roadmap to bring India back to the Olympic fold.

The meeting, which assumed great importance for India's sporting future, will now work out the exact details and time frame to get the ban lifted since it was imposed on December 4 for India's failure to adhere to the Olympic Charter.

A top IOA official, who is part of the delegation, said the meetings went off very well and the combined meeting of the IOA, Sports Ministry and IOC officials will work out the details.

"It was good and fruitful meetings so far. We are hopeful of an early solution to the issues. A roadmap is being drawn for India's return to the Olympic fold," the top official said. 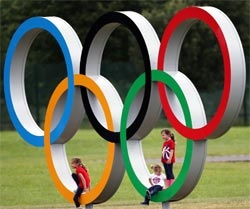 The run-up to the meeting was marred by the dramatic pull-out of IOA acting president V K Malhotra and IOC member in India Randhir Singh.

The two decided to boycott the meeting after the IOC agreed to include Batra and Anand in the IOA delegation for the meeting, in addition to the four-member list submitted earlier.

It is also learnt that the Olympic Council of Asia, which had only on Tuesday asked the IOC not to interact with the suspended IOA officials and postpone the meeting to mid-June, was represented in the meeting by its Director of the Asian Games Department, Haider Farman.

After these two preliminary meetings, a combined meeting took place where the delegates gave their views on the contentious Sports Bill and the amendments to the IOA's constitution.

It is learnt that the IOA delegates agreed in principle to the age and tenure restrictions and were also willing to carry out certain reforms in accordance with the Olympic Charter.

"Our aim was to start the process of getting the ban lifted and we have moved forward to some extent. We are hopeful that the ban will be lifted sooner than later," the official said.

The IOC, on its part, is expected to issue a statement on the development at a later stage.

The IOC had decided to ban India as the IOA failed to comply with the Olympic Charter and also allowed a tainted official to contest elections for a top post.

A day after the ban was imposed, the IOA went ahead with the elections under the government's Sports Code, defying the IOC's diktat to hold the polls under the Olympic Charter.

The IOC declared the elections "null and void", besides also directing those elected not to discharge any official duties. The world body, which communicated only with Malhotra and Randhir after the ban, also asked the National Sports Federations to distance from the Abhey Singh Chautala-led dispensation.