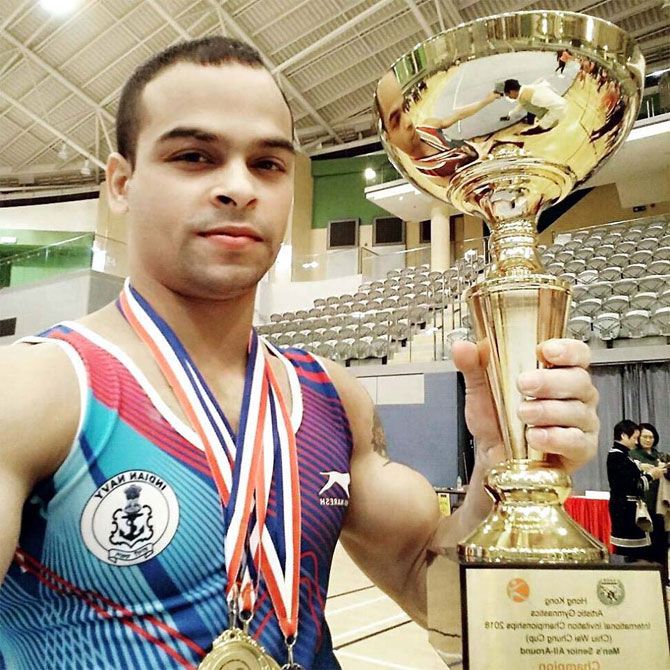 Included in India's Commonwealth Games gymnastics squad after going to court, Rakesh Patra is desperate for a medal not just to prove his worth but also to become financially strong enough to change his family's fortunes.

The 26-year-old artistic gymnast was included in India's CWG squad after he filed a writ petition in the Delhi High Court when his name was initially omitted owing to a tussle between the Gymnastics federation and the Indian Olympic Association.

Hailing from Odisha, the World Cup finalist has endured a tough journey so far, one that he hopes will ease up with a good CWG showing.

The many hardships of his life include surviving a fire tragedy that gutted his family's thatched hut at Hadagadia Sahi in Puri when he was "about five years old".

But despite the challenges, his father Dayanidhi Patra, a primary school teacher in Brahmagiri School about 25 kilometres from Puri, ensured that he got all that was needed to shape into a decent athlete.

"He would get about Rs 400 a month and spend more than half of that on me. I have seen them sleep without eating on some days. I still remember the pain," Patra, a chief petty officer in Indian Navy, told PTI from Mumbai.

Despite the hardships, senior Patra ensured that his son pursued his dreams on the insistence of his childhood coach Ashok Mishra and uncle Subhendu Patra, a former gymnast.

"My uncle and coach told my father that I have a future in gymnastics. Despite being in academics, my father fully supported me. He ensured everything that's needed to become a gymnast," added Patra, who bagged his first national medal at the 2004 Sub-Junior Nationals in Kolkata.

It's been a long journey for Patra, who has been an India regular since 2010 Commonwealth and Asian Games, and was part of five World Championships, but a medal at the top level has eluded him.

"It remains a regret," he admitted.

"But I hope things would change in next two years," he said.

The rings and parallel bars specialist made the finals in both the events of last month's World Cup in Melbourne.

It included a fourth place finish in rings, behind his opponents from Japan and China who will not be seen in Gold Coast, something that has fuelled his dreams of a coveted medal.

"I'm not going there setting my eyes on the medal. I know I will get a medal if I'm able to give my best show on the given day," said Patra, who is based at Sports Authority of India's Eastern Centre in Kolkata.

"I'm slowly reaching perfection. I've about 20 days left and I hope for a perfect outing in the CWG. I will face strong opposition from England and Canada," Patra, who leaves with the Indian contingent from New Delhi on March 31, said.

Supported by GoSports Foundation, Patra went for a 20-day strengthening stint in China in June last year, and early this year he returned with three gold medals from an invitational meet in Hong Kong.

Patra has not visited his home for more than a year as his parents want him to "keep focus on training".

"I wanted to go there to dump my father's cycle and gift a scooter to my father. But he rejected my suggestions, and told me 'first win a medal and then come'. I cannot let all their hardships go in vain," he concluded.