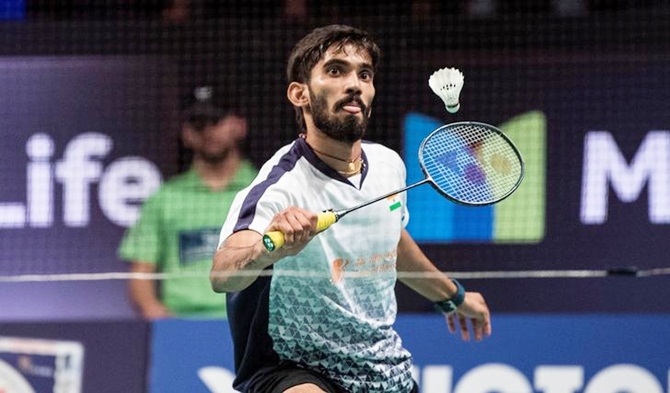 A star-studded Indian badminton team will begin its quest for a maiden gold medal when they take on minnows Sri Lanka and Pakistan in the mixed team championship on the opening day of the 21st Commonwealth Games in Gold Coast on Thursday.

India have been accorded the top seed this time and are clubbed with Sri Lanka, Pakistan and Scotland in Group A.

With the likes of Olympic silver medallist P V Sindhu, World No 2 Kidambi Srikanth and a promising men's doubles pair of Satwik Ranki Reddy and Chirag Shetty in their ranks, formidable India will hardly break any sweat en route to the knockout stage.

Silver medallists in 2010, India had narrowly missed a bronze medal in the 2014 Glasgow Games after losing to Singapore in the medal play-off and Pullela Gopichand coached team would look to make amends.

India is a formidable side and the only countries likely to trouble them are three-time champions Malaysia and England, who have won the gold six times.

Malaysia, who clinched the gold in the 2006, 2010 and 2014 editions, have three-time Olympic silver medallist Lee Chong Wei in singles and a strong men's doubles combination of Goh V Shem and Tan Wee Kiong.

England, on the other hand have Rajiv Ouseph in singles and a formidable mixed doubles husband-wife combination of Chris Adcock and Gabriella Adcock. Singapore too are likely to reach the semi-finals with their young 10-member squad.

With Sindhu suffering an ankle strain just a week ahead of the Games, Saina Nehwal will take the court on Wednesday against Sri Lanka's Madushika Dilrukshi Beruwelage at the Carrara Sports Arena in the women's singles.

The clash against lightweight Sri Lanka will begin with Pranaav Chopra and Ruthvika Gadde taking on Sachin Dias and Thilini Pramodika Hendahewa in the mixed doubles.

In the men's singles, Srikanth, who won four titles last season, will then take on London Olympian Niluka Karunaratne but he is unlikely to be stretched by his rival, whom the Indian had beaten in the Glasgow edition as well.

India will cross swords with Pakistan in the evening. 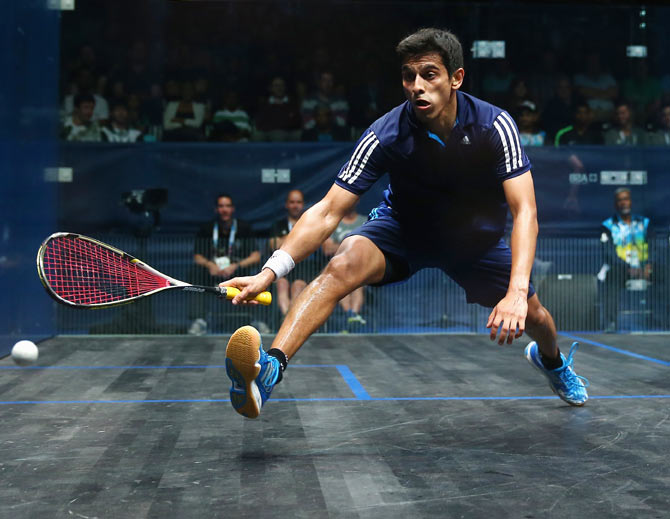 IMAGE: Saurav Ghosal gets another opportunity to go one better than his effort in Glasgow in 2014 and claim a medal for India. Photograph: Julian Finney/Getty Images

Third seed Saurav Ghosal will be India's best bet for a first-ever singles medal in squash when the individual events begin on Thursday.

Ghosal, who had lost the bronze medal play-off in Glasgow four years ago, gets another shot at making history.

He has got a first round bye and starts his campaign only on Friday.

Ghosal, who reached a career-high 13 in the world rankings at the start of the month, is drawn to meet eighth seed Alan Clyne of Scotland in the quarter-finals and second seed Paul Coll of New Zealand in the semis.

"I am feeling really good about my game and fitness-wise too I have not felt better. A major reason for that is the time I spent at Abhinav Bindra's high-performance centre," Ghosal had told PTI before leaving for Gold Coast.

Other Indians in the men's singles draw, Harinder Pal Sandhu and Vikram Malhotra, play their opener on Thursday.

Dipika Pallikal and Joshna Chinappa made history in Glasgow by winning the women's doubles gold and a repeat of that performance is very much on the cards. However in singles, it will be much tougher for India's leading ladies.

Both Indians are in the same half of the draw which also has defending champion Nicol David of Malaysia and second seed Joelle King of New Zealand.

Pallikal, who has never beaten David, is drawn to meet the two-time gold winner in the quarters. The Chennai-based player first has to deal with the fifth seed Alison Waters of England in the second round.

Chinappa should reach the quarter-finals without much difficulty but it will require a special performance to beat King in the last-eight stage.

The doubles and mixed doubles will follow the singles event.

The Indian women's hockey team begin their Commonwealth Games campaign against Wales on Thursday, with an eye on ending its 12-year medal drought at the multi-sporting event.

The women's team had last won a Commonwealth Games gold in 2002 followed by a silver in 2006.

Brimming with confidence, the Rani Rampal-led Indian team is eager to begin the show.

"We are here to finish on the podium and nothing less," said Rani who led the team to Asia Cup victory in November last year.

But to reach the podium, the team needs to get past the initial hurdle in Pool A which has Wales, Malaysia, England and South Africa.

"It is a challenging Pool but I believe we can advance to the next stage," asserted Chief Coach Harendra Singh on the eve of their first match.

Though India have excelled in the past against Wales, Rani said the team will not rely on history.

"Every tournament is like a new chapter, any team can come up as a winner and we cannot take an opponent lightly going by previous results," she said.

Their second match on April 6 is against a lower ranked Malaysia who are No. 22 in the world. It is their third match against Olympic champions England on April 8 that will put this team to test.

England are undoubtedly strong contenders for the gold medal and to doing well against them will be a big motivation for the Indian team.

"We have worked in the past two months at the national camp with the sole purpose of doing well against European and Oceanic teams. Our focus on improving strength and agility was mainly to stay up to speed when we play against a quality team like England and we are looking forward to that match specifically to see where we stand," Rani said.

The team's final Pool match will be against South Africa on April 10.

Top two teams from each Pool will make it to the semis.