India remains far from becoming a sporting superpower, the CWG have been a happy hunting ground for the largest nation in the Commonwealth IMAGE: A street decorated ahead of the Commonwealth Games 2022, in Birmingham. Photograph: PTI

India's top-five standing in the Commonwealth Games will be threatened in shooting's absence while the Birmingham 2022 organisers would look to deliver a successful sporting spectacle after a challenging build-up.

The opening ceremony at the Alexander Stadium on Thursday evening will mark the beginning of the sporting extravaganza that remains huge in scale but is fighting to remain relevant.

The UK is hosting the mega event for the third time in the last 20 years with the Commonwealth Games Federation (CGF) unable to attract new bidders out of the 56 countries that made up the sporting body due to cost constraints. The CGF has 72 members but is made up of 56 countries. 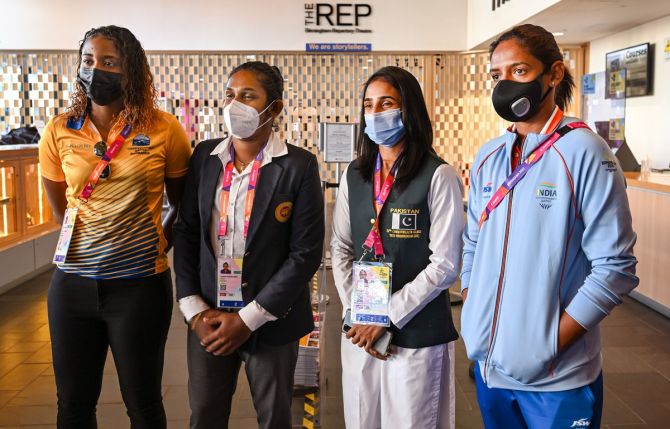 Birmingham too was rather a late entry in the bidding for the the 2022 edition after South Africa expressing its inability to stage the event back in 2017.

"We need to make the Games more affordable and take it to cities which are yet to host them," Birmingham 2022 CEO Ian Reid said.

The Games, set to be the biggest and most expensive sporting event in the UK since the 2012 London Olympics, have had to deal with the adverse impact of COVID-19 though the budget remains at 778 million pounds till date.

That number needs to come down for the smaller nations interested in bidding for the event.

India's top-five finish not a given this time

While India remains far from becoming a sporting superpower, the CWG have been a happy hunting ground for the largest nation in the Commonwealth.

A top-five finisher since the 2002 edition, India has relied a lot on shooting which was controversially dropped from the Birmingham Games programme.

In the Gold Coast Games four years ago, shooters won 25 per cent of India's total medals of 66 and the sport had contributed seven gold. The big question is how will India compensate for the absence of shooting?

A bagful of medals are expected in weightlifting, badminton, boxing, wrestling and table tennis but they might not be enough to offset the loss caused by shooting's absence.

Athletics, in which India has won only 28 medals in the event's 72-year-old history, was expected to be a dark horse this time but Olympic champion Neeraj Chopra's late pull out due to injury has come as a huge setback.

"He was the captain of the athletics team, it will make a huge impact but the athletes are focused on the job. Shooting's absence will hurt us but athletics can compensate for that in some by getting 7-8 medals," reckoned World Championship medal winning long jumper Anju Bobby George. 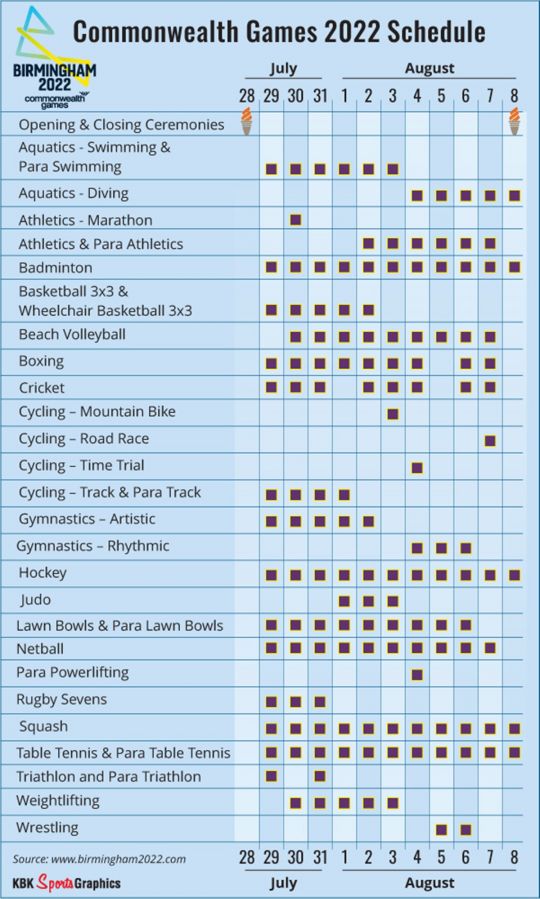 Anju is expecting medals in events like women's javelin, long jump despite a few failed dope tests in the contingent.

Sekar Dhanalakshmi, who was to compete in women's 100m and 4x100m relay, and Aishwarya Babu, who was to feature in long jump as well as triple jump, were pulled out of the 36-member team after failing dope tests.

A gold rush, however, is expected in wrestling with all 12 participants, including defending champions Vinesh Phogat and Bajrang Punia, expected to finish on the podium. In Gold Coast, wrestlers tallied 12 medals, including five gold.

Weightlifters, who aggregated nine medals including five gold four years ago, are ready to emulate that performance. The field will be led by Olympic silver medallist Mirabai Chanu.

The shuttlers, led by superstar P V Sindhu, will be expected to win medals in the women's singles, men's singles, men's doubles and mixed team category. The other stars in the squad include World Championships medallists Kidambi Srikanth and Lakshya Sen.

Hockey will be among the most widely followed sports from India's point of view and the players, both men and women, will be looking to make amends of the disappointment of the Gold Coast edition when the team returned empty handed.

After a historic high of the Olympics last year, Indian men will be out to end Australia's dominance while the women, who finished fourth at the Tokyo Games, will back themselves to finish in the top-three.

In table tennis, India finished first in the medal tally at Gold Coast with eight medals with half of them coming from Manika Batra. It will be tough to match that feat but at least two gold medals are likely.

India veteran Sharath Kamal, who would be featuring in his fifth and last CWG, is aiming to win a singles gold 16 years after he won his first.

The boxers, who fetched nine medals four years ago, will also be a major contributor to the medals tally.

Amit Panghal will be eager to exorcise the ghosts of a disappointing Tokyo Games campaign while Olympic bronze medallist Lovlina Borgohain will seek redemption after an underwhelming World Championship outing.

Among the non-Olympic sports, squash will be looking for its first ever medal in the singles category. Two gold medals are likely to come from mixed doubles and women's doubles.