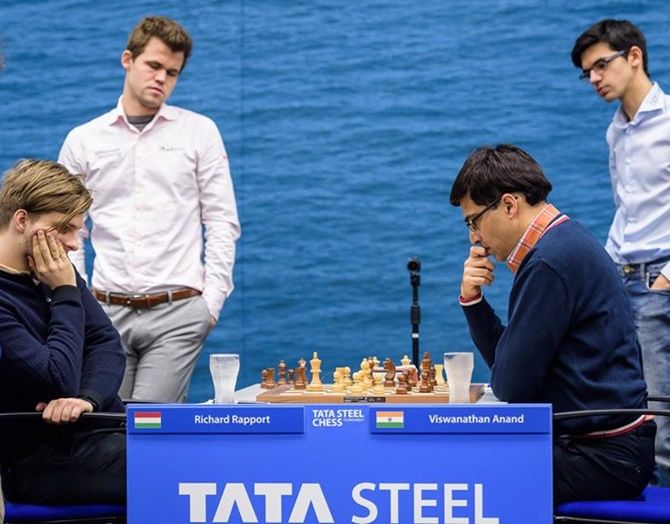 Struggling for consistency, five-time world champion Viswanathan Anand, on Tuesday, said he is becoming 'my own worst enemy'.

Anand missed the Grand Chess Tour Finals by just 1.5 points, getting eliminated after managing just one point in the last five games of the Tata Steel Rapid and Blitz tournament that concluded, in Kolkata, on Tuesday.

"I've no words to describe. I would give myself a chance and then I would become my own worst enemy. That probably bugs me. If I had no chance then it would have been nice actually," Anand said after the tournament.

The biggest heartbreak came in the round 15 when the former Blitz king lost to Dutch number one, Anish Giri, from a winning position and saw his flag fall in front of the crestfallen spectators at the National Library Auditorium.

Such was the despair that Anand remembered veteran John Cleese's dialogue from the 1986 movie Clockwise where the British actor says: "It's not the despair, Laura. I can take the despair. It's the hope I can't stand."

"I'm okay with failure but it's the hope that's killing me. This is what I was doing today. I kept giving myself a chance and then I destroyed myself."

"It (the game against Anish) was probably the final straw. I was just winning. I forgot about the clock. If I won the game, I was back in contention. I was my worst enemy," he rued.

In such troubled times, the Indian wizard found solace from his son Akhil's dance performances at school.

"Almost the whole year, I've been struggling to put up any kind of stability and consistency. The good news is my son got second prize in school dance competition so that's the most important thing right now. The joy of being a father."

"I was at home when he was practising for his competition. He took it very seriously, putting the soundtrack and would do the steps. It paid off."

Anand, who had finished third in the penultimate leg in Bucharest, concluded with a seventh-place finish. Anand had earlier missed the ticket for the next year's Candidates.

"This year has been tough. The nice thing when you come to the end of the year you tend to forget everything and kind of wipe the slate. Hopefully, I can look forward to next year," Anand, who turns 50 next month, said.

"Right now I've to think about why things are going so wrong. Try to be better next year," he said.

Reigning world champions Magnus Carlsen finished the tournament with a whopping 27 points and broke his own record in the Grand chess tour, bettering his 26.5 points scored at Abidjan, Ivory Coast earlier this year.

"I knew before today that I needed to score points to regain the world number one spot in Blitz. I think I'm second now -- that's a bit less disastrous than being fifth. But in the long run, being number one is what it counts where I feel like I belong," the Norwegian said.