I was nervous, that's why I wasn't able to give my 100 percent, says Bhavinaben

'I was very nervous, so that's why I wasn't able to give my hundred per cent in the match.' 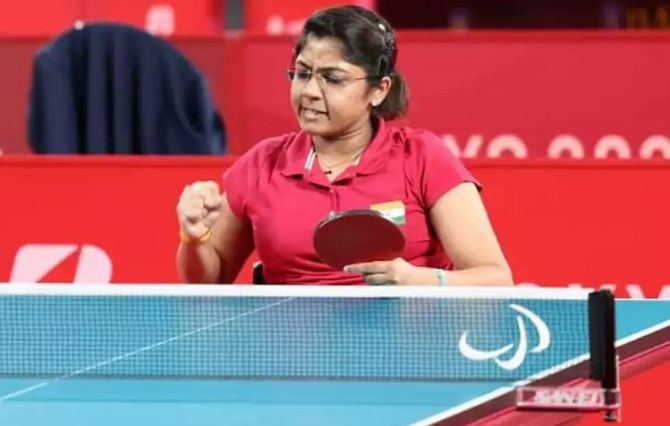 IMAGE: India’s Bhavinaben Patel had to settle for silver after losing to Chinese paddler Ying Zhou in the women's singles Table Tennis Class 4 final at the Tokyo Paralympics on Sunday. Photograph: SAI Media/Twitter

After scripting history with a silver medal at the Tokyo Paralympics on Sunday, India's paddler Bhavinaben Patel said nerves played a role in her defeat in the gold medal match against World No 1 Zhou Ying.

Patel went down to China's Zhou Ying 11-7, 11-5, 11-6 in straight sets in the women's singles - Class 4 final. She is the first table tennis player from India to win a medal at the Paralympics and the second female athlete from the country after Deepa Malik to achieve this feat.

"I am very happy on one side and on one side I was very nervous, so that's why I wasn't able to give my hundred per cent in the match. I am not satisfied and a little bit disappointed. But I will fulfil all the shortcomings in the next tournament," Patel said after the final.

"I am able to control my mind very well. It's not a big thing for me. But this was my first experience. The Chinese player played very well. She had a very fast moment and have a huge experience so that's why I was nervous."

"I tried to give my hundred per cent but I wasn't able to give and that's why I am disappointed. If I gave more effort, definitely I would have done it (won the gold medal)."

Incidentally, Patel had also lost to Zhou in her first group stage match on Wednesday.

"I was confident that I would win a medal against her and will definitely win gold. But I felt a little bit of pressure as I wasn't able to control my thoughts. The way I wanted to play was not exactly implemented by me," she said.

"I tried to give her (Zhou) side balls but she was able to hit it. So I thought I shouldn't give her those negative points and decided not to continue with that."

Talking about becoming the first Indian to win a table tennis medal at the Games, she said: "I am very happy that the Indian has created history in para table tennis. Many people and organisations have supported me in this journey. Special thanks to my coach sir because he has supported me throughout and made me do the very hard practice."

Patel also thanked her family and god for the silver medal. "I also want to dedicate my medal to the supporters, India, PCI, SAI, TOPS, Blind People Association, without their support am nothing."