East Bengal handed Sporting Clube de Goa their second consecutive defeat in the I-League when they sailed to a 1-0 win at the Nehru Stadium, Fatorda, in Goa on Monday.

Australian striker Tolgay Ozbey scored the winner in the 24th minute. East Bengal now move to 16 points from 8 matches while Sporting stay on 12 points from the same number of ties. 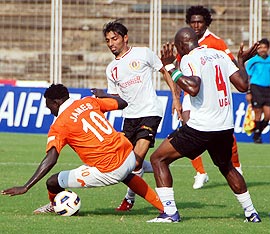 Sporting Clube started with just one striker upfront but James Moga, the leading goal-scorer in the league, stayed ineffective without adequate support.

East Bengal enjoyed major ball possession in the first session and it was not a surprise that they were the first to score. Tolgay snatched a ball from Sporting defender Matthew Gonsalves and cut past Sporting goalkeeper Gerrard D'Mello to slot home in the 24th minute.

Sporting had the first clear look at the East Bengal goal in the 36th minute. Rojen Singh crossed beautifully into the heart of the East Bengal defence where Moga controlled the ball and took a sudden shot but an alert Gurwinder Singh cleared the danger despite goalkeeper Sandip Nandy beaten.

Sporting had another chance to draw level but Ogba Kalu's shot landed straight into Nandy's gloves.

After a couple of narrow misses, East Bengal finally looked like they would score the insurance goal just before half-time. Naoba Singh's crushing long ranger crashed into the goalpost, but Ozbey could have done better with the rebound rather than shooting straight to the goalkeeper.

In the second session, East Bengal's saga of missed chances continued. Penn Orji stayed guilty of shooting wide after being put through by midfielder Mehtab Hosain.

In the last quarter, Sporting pressed men forward and had several chances to restore parity but Sandip Nandy made a couple of good saves and one header from Moga hit the post.