A spectacular pile-driver from former international Deepak Mondal gave Prayag United the necessary lead to help it upset the Kolkata giant Mohun Bagan 2-1, in a 16th round I-League match, played at the Salt Lake Stadium, in Kolkata on Sunday.

Prayag began confidently and found the lead as early as 16th minute off its New Zealand striker Kayne Vincent. The doughty forward nodded home a nicely-set corner of James Singh.

Prayag's lead did not last long as Mohun Bagan got back the equaliser in the 19th minute, when Mohun Bagan stopper-back Anwar Ali doubled up as an attacker and found the target off a Dhanarajan centre.

Both sides shared a few more scoring opportunities but failed to utilize them effectively.

Deepak Mondal proved his merit yet again as he came on the overlap to get the winning goal for the Purple Brigade.

The win took Prayag United to 28 points from 16 matches while helping it overtake Mohun Bagan -- which remained on 27.

Prayag's Deepak Mondal was adjudged man of the match.

It was the host who had majority of the ball possession in both the half but they lacked finishing touches upfront and failed to convert chances that came their way.

Till the breather the scoreline remained 0-0.

Changing over, both the team kept trying without any success. It was only in the 81st minute of the game that Lajong broke the deadlock when Tuboi headed home on former National player Rennedy Singh corner.

Lajong's joy was short lived when Ranti Martin's well measured shot from the midfield found the back of the net in the 88th minute of the game.

Two minute later referee S. S. Panda of Orissa awarded spot kick in favor of Goan side after he caught Wailadmi Passah handled the ball. Taking the shot Ranti, who was later declared man of the match, made no mistake to give his side a match winner. 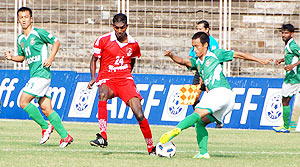 Till the first half an hour, it remained goalless but the defending champions had their noses in front in the 30th minute when Ishfaq Ahmed gave them the lead.

Four minutes later, Edeh Chidi scored the team's second goal as the defending champions had the match well and truly in its pocket. Ryuiji Sueoka converted from spot in 84th minute as Salgaocar completed the rout.

It was Ryuiji Sueoka who set the pace for Salgaocar, as Churchill defence found him too slippery to keep an eye on. The Japanese midfielder tested rival goalkeeper Felix D'Souza's alertness with a smart flick which Felix somehow managed to parry away.

Salgaocar opened the account just after the half hour mark as Francis Fernandes slipped a ball through to Ishfaq who did well to draw out the goalkeeper and then finish in style.

Salgaocar scored the insurance goal soon enough, this time thanks to the brilliance of Chidi. The Nigerian striker took a sudden shot which took everyone, including the Churchill goalkeeper, by surprise.

Sueoka completed the rout in the 84th minute when he converted a penalty which was awarded after Gouramangi Singh brought down Francis Fernandes.

Man of the match was awarded to Tomba Singh.

Pune FC had everything on a platter--a home ground to play an away match, a full strength team to choose from and a form that has seen them remain unbeaten for nine matches so far--but on lovely Sunday afternoon they allowed Air India to dictate the terms to a 2-2 draw.

Air India striker Ezeh Henry's rapper of a goal in the 14th minute of the match gave hosts a chance to force Pune FC on the back-foot. For most part of the first half, Pune FC played a catch-up game with its forward-line finding it difficult to get past Air India goalkeeper Pawan Kumar.

Seventeen minutes into the second half and Air India seemingly nailed Pune FC's confidence, when Sandesh Gadkari set up Takayuki Omi in the box for 2-0 lead.

Finally, it was seasoned Shanmugham Venkatesh who broke through the Air India defence and let the ball into the nettings in the 76th minute.

In the third minute of injury-time, Maninder's corner kick was cleared over the sidelines bringing in Lester Fernandes for throw in. Lester's floater landed right in the middle and a tap from Subhash Singh inspired defender Chika Wali to run through the defence and head in the equalizer.

With this draw, Pune FC now have 27 points, while Air India stays with 21 points.