I-League: Pailan go down to Prayag

Pailan Arrows stays 'luckless.' Despite dominating for most part of the match and hitting the cross-piece twice, they went down to Prayag United 2-1 in a crucial I-League match at the Salt Lake Stadium, in Kolkata, on Thursday.

The match started off with Yusif Yakubu scoring in the 5th minute.

Changing over, Pailan equalised in 62nd minute. A perfect cross off Prabir Das from the right was headed in by CS Sabeeth.

But the joy didn't last long. It lasted just three minutes and ended with a fine goal. Shylo Malsawmtulunga finished it off as he showcased his class with a clever tap which foxed Pailan goalkeeper Naveen Kumar.

In another match at the Balewadi Sports Complex in Pune, Sporting Clube de Goa scraped past Air India 2-0.

Sporting Clube de Goa who adopted a defensive approach for most part of the game made the most of the opportunities that came their way.

Earlier, Air India showed more urgency to control the pace of the match in the first half. Soon after the start, the home team earned back-to-back free-kicks in a space of five minutes, but failed to convert them. 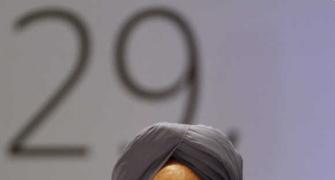 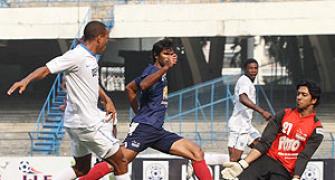 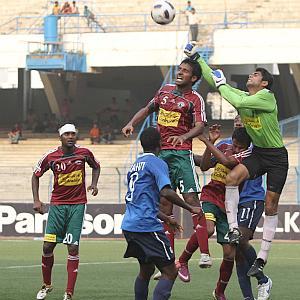