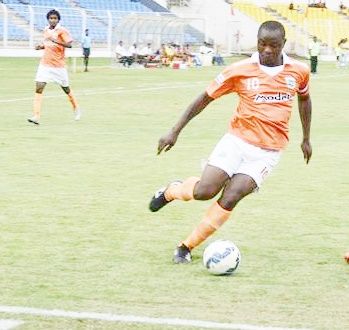 Odafe Okolie scored twice from the penalty spot to guide Sporting Clube de Goa to their first win at home as they rallied to beat Mumbai FC 3-2 in the Hero I-League, in Margao, Goa, on Sunday.

Sushil Singh (17th and 57th minute) scored a couple of goals for the visitors but Nicholas Fernandes (24th) and two penalties from skipper Odafa (74th and 86th) helped the Goan outfit climb to the fourth position with 11 points in their kitty.

On the other hand, Khalid Jamil named an unchanged line-up with Taisuke Matsugae not travelling with the squad due to an injury.

After a period of brief dominance by Sporting it were the visitors who opened the scoring through Sushil Singh from a corner-kick in the 17th minute.

Sporting responded soon after when Odafa received the ball from a throw-in and wriggled past a few defenders. He picked out Nicholas Fernandes on the left who had the time and space to score the equaliser.

The teams were tied 1-1 at half time. And Mumbai FC took the lead for the second time when Arata Izumi initiated a counterattack and sent Sushil through who shot the ball over Arindam Bhattacharya to make it 2-1.

In the 74th minute, Sporting won a penalty when Ranti Martins was brought down and Odafa sent Pawan Kumar the wrong way to restore parity. Sporting earned another penalty soon and Odafa once again placed it well to make it 3-2.