McDowell Mohun Bagan routed Shillong Lajong 6-1 during the I-League encounter at the Yuba Bharati Krinangan, in Kolkata, on Tuesday. 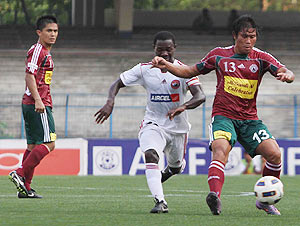 The first 20 minutes were even till Rahim Nabi scored the opening goal off a Barreto pass. Three minutes later, Bagan scored their second -- AIFF Player-of-the-Year Sunil Chettri finishing perfectly after Barreto put him through.

Soon Odafa Okolie got his name on the scoresheet as he scored his first in the 41st minute.

Changing over, Odafa scored again -- this time wading his way past five defenders inside the penalty box.

In the 57th minute Shillong Lajong had something to cheer about when Subhas Singh snaked in from behind to score off a header. But Bagan were back in business within two minutes. This time Sunil Chettri was brought down in the box and Jose Barreto converted the resulting penalty.

In the 75th minute Chettri was in the heart of action once again when he delightfully curled it over an advanced rival custodian.

Chhetri was declared the man-of-the-match.

Pune FC showed character as they rallied to beat Hindustan Aeronautics Limited  (HAL) 6-4 in Bangalore. Down by a Rohit Chand goal in the first minute, Pune came back strongly to take a 4-1 lead by the interval.

But HAL, spurred on by Rohit, who went on to score a hat-trick came back strongly in the second half as they matched Pune FC for pace and counter-attacked with purpose. But a stubborn Pune FC defence managed to hold on.

Mumbai FC played one all draw against young Pailan Arrows who showed great comeback and earned a well-deserved draw in the 24 round I League encounter at the Balewadi Sports Complex, in Pune, on Tuesday.

The Khalid Jamil coached side was all set to sign off on a winning note and moreover their relegation looming over, all three points were crucial for Mumbai FC.

Mumbai took the lead in the 29th minute via a fantastic finish by Abhishey Yadav. The first half ended with Mumbai FC dominating possession.

On changing the ends, it was all Pailan Arrows.

Jamil's frustration was visible as the Mumbai midfield was completely ineffective. Kuttymani walked off the pitch straight into the dressing room on being substituted and Abhishek Yadav lost his cool against Gurtej Singh when Ajmaludheen was down injured. With such a tempo, the inevitable happened and the Pailan Arrows scored the equalizer on the 71st  minute through George Alwyn.

With this draw Mumbai FC now have 21 points from 24 matches while Pailan Arrows are at 9 points from 21 outings.