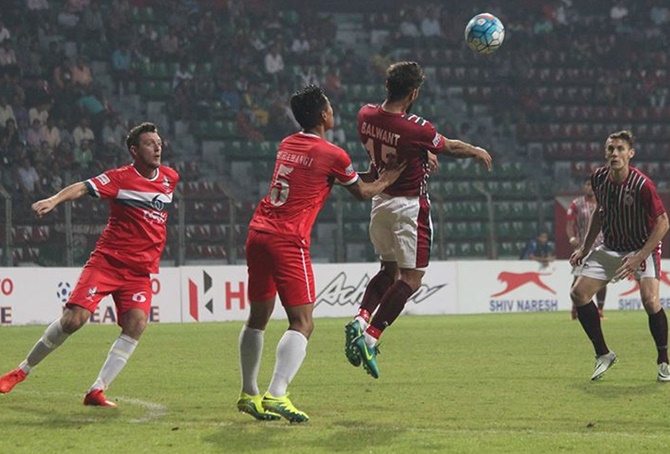 Balwant Singh slammed a brilliant brace in a magical two-minute display as Mohun Bagan bounced back from a goal down to beat DSK Shivajians FC 3-1 in the
I-League, in Kolkata, on Saturday.

With the Mohun Bagan defence caught napping, Milan Singh Ongnam put the Pune outfit ahead in the 33rd minute but the Mariners nosed ahead with Balwant's double strikes (42nd and 44th) from Pritam Kotal assists at the Rabindra Sarovar Stadium.

Having drawn their last two matches, Mohun Bagan returned to winning ways and caught up with arch-rivals East Bengal, though the Mariners remained second on points difference.

Both the Kolkata heavyweights now occupy the top two places with an identical six wins and three draws and they remained unbeaten after nine matches.

An intense match between Mumbai FC and Bengaluru FC ended in a goalless stalemate in the I-League, in Mumbai continuing the defending champions' winless run and dealing a blow to their title aspirations.

Mumbai FC hosted rivals Bengaluru FC in a crucial tie at Cooperage Stadium. The match turned out to be a goalless draw as both the sides failed to deliver the knockout blow.

Heading towards the match, both the sides were on a poor run of form. Mumbai FC started off brilliantly after keeping the majority of the ball possession. As the ma