Bottom-placed HAL, Bangalore dished out a spirited display to hold local giants Mohun Bagan to a goal-less stalemate in their 23rd round return-leg I-League match at the Yuba Bharati Krirangan in Kolkata on Friday.

Having lost out on the title race, for Mohun Bagan it was their third draw from as many matches to be on 40 points from 23 matches. HAL have eight from 22. 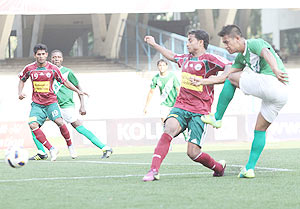 In fact, the Bangalore outfit, who have just a solitary win (against United Kerala) from 22 matches, did well to get under Mohun Bagan's skin as the heavyweights looked disjointed and lacked motivation.

HAL defenders did well to mark Mohun Bagan dangerman Odafa Okolie and expose the hosts' over dependency on the Nigerian stalwart.

Once Odafa was marked, Bagan lost the plot as Brazilian midfielder Hudson Lima who made a comeback after an injury lay-off, could not help their cause.

Bagan, nevertheless, had the first chance of the match when a Jewel Raja shot from a Jose Barreto pass sailed over in the 17th minute.

Relying on counterattacks, the Bangalore outfit put Mohun Bagan under pressure but goalkeeper Shilton Paul stood out under the bar.

In the 24th minute, Ajith Kumar had a powerful shot from a corner but Paul made a spectacular save.

HAL missed another golden opportunity to surge ahead, in the 64th minute, as Rohit Chand missed form close.

Mohun Bagan did go all out in the last 20 minutes but with Odafa not being given an inch by the rival defenders, the fate did not change.