Bengaluru FC were crowned as I-League football champions for the second time in three years as they blanked Salgaocar 2-0 in their penultimate league match, in Bengaluru, on Sunday.

Eugenson Lyngdoh (8th minute) and Seminlen Doungel (87th) scored for Bengaluru as Ashley Westwood-coached side took full three points to clinch their second I-League title in front of their home crowd at the Kanteerava Stadium.

This means that their last league fixture against Mohun Bagan on April 23 in Siliguri has been rendered inconsequential as far as I-League title is concerned. 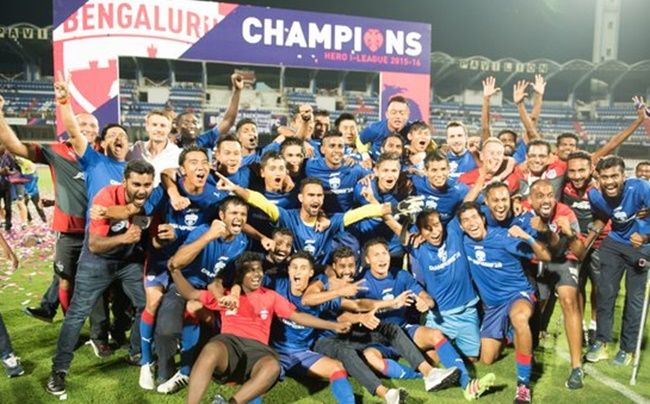 But that match will have importance for deciding the second-place finisher as East Bengal (25 points from 15 matches) are currently at third just two points behind Mohun Bagan.

East Bengal can finish at second if they beat Shillong Lajong in their last match on April 24 in Shillong and Mohun Bagan lose against Bengaluru.

Seeking to clinch the title on Sunday itself, Westwood fielded the first choice eleven for the clash with Curtis Osano and John Johnson returning to the fold as centre halves with Eugeneson Lyngdoh and Michael Collins manning the midfield.

Youngster Malsawmzuala got a start with Udanta Singh as the wingmen. Skipper Sunil Chhetri combined with Korean Kim Seong Yong to form the attacking nucleus of the 'Blues'.

It took just eight minutes for Bengaluru FC to open the scoring through Eugeneson Lyngdoh. The India midfielder scored his third goal in his comeback from injury as he latched onto a loose ball from Salgaocar goalkeeper Karanjit Singh's punch off a cross from the left.

Unmarked 25 yards out, Lyngdoh drove it straight across the ground with a right footer to take the early lead and leave the Goans fluttered. The mercurial Dias with a brilliant effort converted from a 25-yard free kick in the 41st minute to give the home team a deserving 1-0 half-time advantage.

The visitors managed to fight back and drew level when their Brazilain midfielder Fabio Pena scored from what a contentious penalty in the 55th minute. But Dias once again was the thick of action and with one of his trademark special delivery provided Min-Chol Son with the perfect header.

The ball bounced in front of goalkeeper Vishal Kaith but he fumbled with a simple collection and allowed the ball to slip through much to the cheer of the home supporters. At the other end, Fabio had two attempts at goal with the going wide across the goal and later his header narrowly missing the target in the 34th minute. The Mumbai persistence finally paid off when Brown was brought down by Zodingliana a little outside the box and Dias stepped forward a coolly curled the ball over the Lajong wall and past the despairing dive from Kaith and into the top left corner.

Shillong were lucky to restore partity when referee Venkatesh R. awarded them a penalty when Penn Orji fell after a tackle from defender Anwar Ali and Fabio successfully converted in the 55th minute. Thereafter Mumbai FC came close to regaining the lead with Dias, Taisuke and Sushil missing the target before Son finally found the back of the net in the 86th minute.

Following Dias’ flag-kick from the right Son did well to meet the end of the ball and head firmly. Goalkeeper Kaith made a total mess and let the ball slip in to the net. Mumbai FC ensured their citadel stayed intact in the remaining time to snatch the win and three valuable points.

The Mumbai side have now climbed to the sixth position with 16 points while Lajong with 15 points move to the bottom of the nine-team standing.

Mumbai FC will now take on DSK Shivajians in the final round on April 24.