I have to keep learning new strokes everyday: Sindhu

'It is only the starting for me. I have a lot more to learn' 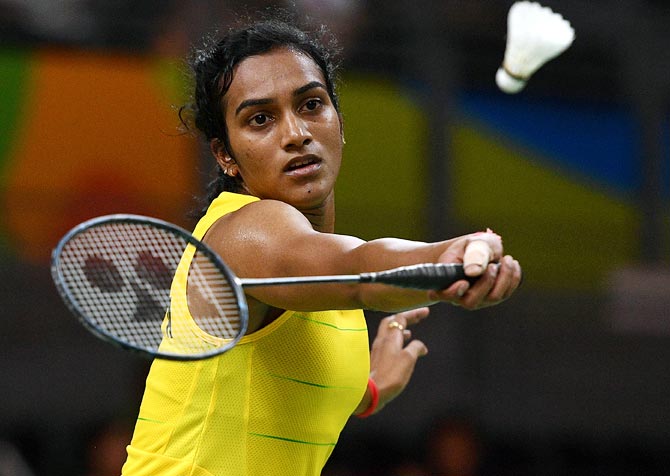 IMAGE: Sindhu has been a formidable force in the world in the last three years. Photograph: David Ramos/Getty Images

Olympic silver medallist P V Sindhu, on Wednesday, said she still has lots to learn and needs to add a few more shots to her repertoire to dominate world badminton.

With silver medals at all the major events, including the Olympics, World Championship, Asian Games and Commonwealth Games, Sindhu has been a formidable force in the world in the last three years.

But the world no 1 tag has eluded her with Chinese Taipei's Tai Tzu Ying stamping her authority at the top with 14 title triumphs since 2016.

Asked if she needs to add strokes and deception to dominate world badminton, Sindhu said: "Definitely yes. It is only the starting for me. I have a lot more to learn. I have good strokes but I have to keep learning new strokes everyday."

"But I think only one player can't dominate badminton, because the game is changing right now as a lot more players are coming up. Also on a particular day, you have to be 100 per cent, can't be even 1 per cent here or there, if you count 1 to 20 in the world, all are of the same standard, so have to be focused all the time."

One of the favourites to claim the All England trophy next month, Sindhu said she is working hard to break India's 18-year-old title jinx at the prestigious tournament.

"After this week, only two weeks will be left for the All England. I know Carolina Marin will not be there (due to injury) but it won't be easy, because there are some very good players and on that day who gives best will win," Sindhu said.

Asked about ending the title drought for India, Sindhu said: "Hopefully yes, I think it will be really good if someone breaks it someday and definitely we will work for that."

Currently in Guwahati for the National Championship, Sindhu said: "It is good that we are playing in different parts of the country and it is my third time here. It gives a chance to a lot of youngsters to come up and succeed."

"Last time, I lost narrowly, it wasn't my day. So this time I will hopefully give my best," said the two-time former champion, who had lost to Saina Nehwal in the final last year.

Talking about Assamese shuttlers, she said: "There are some very good players in Assam, they are doing well like the left-handed Ashmita Chaliha."