The Hyderabad Open badminton tournament, scheduled to be held in August, was on Thursday cancelled by the sport's world governing body in view of the coronavirus pandemic, days after the unveiling of a revised calendar.

The tournament, set from August 11 to 16, was one of the three to be held in India in the calendar announced by the Badminton World Federation (BWF) on May 22 to restart the sport after the pandemic-forced cancellations since March.

"BWF and Badminton Association of India have agreed to cancel the Hyderabad Open 2020 (11-16 August) - a Super 100 on the BWF Tour," the BWF said in a statement.

The Yonex-Sunrise India Junior International Grand Prix 2020, which was to be held in Pune from August 4-9, has also been cancelled.

BWF Secretary General Thomas Lund said circumstances have and will continue to change in certain countries and therefore further updates on the status of tournaments will be given as and when necessary.

"These changes announced today are necessary but do not directly impact the new BWF Tournament Calendar 2020, which was created to allow for changes as part of our framework for badminton's potential return," he said.

"Health, safety and movement restrictions are now quite varied across the globe as certain countries and territories slowly return to a new normal.

Chief national coach Pullela Gopichand admitted that it would have been too difficult to commit to a tournament in August as Hyderabad is still under lockdown.

"At the moment the lockdown is still on in Hyderabad and the Telangana government has still not decided when the sports infrastructure will open even though the central government has cleared it. We are just waiting for the information," Gopichand said.

"...it will be too difficult for us to commit for a tournament in August."

The BWF also cancelled two other tournaments -- Australia Open and Korea Masters -- in view of the global health crisis.

"It (Australian Open) carried 'suspended' status until BWF and Badminton Australia could find suitable replacement dates. Both parties have since agreed it is not feasible to hold the tournament at a later date in 2020. The tournament was due to take place 2-7 June.

Three tournaments still remain suspended and an announcement on these will be made in due course.

The BWF also released a revamped tournament calendar for the remainder of the 2020 season, but said further changes can be made later. 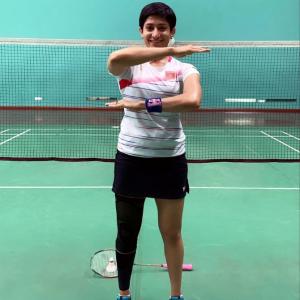 Ashwini, Lakshya back in training as badminton resumes