Three-time Olympian Mukesh Kumar feels "insulted and humiliated" after being sacked by Hockey India as junior national coach, and says the Narinder Batra-led organisation is no different from the Indian Hockey Federation.

"I don't know what was the reason behind this decision. I have spent just 21 days with the team and we did well in the Johor Bahru Cup. I feel humiliated," said Mukesh, from Hyderabad.

"Hockey India is also working like the KPS Gill-led IHF. This is the second leg of my career and I want to make a mark as a coach, but Hockey India is not supportive," added Mukesh, who represented India in the 1992, 1996 and 2000 Olympics.

What hurts him most is that Hockey India did not even have the courtesy to inform him that Baljit Singh Saini was appointed the junior India team's coach and will be in charge of the national camp, starting in Bangalore on March 15.

"Hockey India did not even inform me about this. During the Olympic qualifiers in Delhi, Hockey India general secretary Narinder Batra suggested to me that it would be better if I work with the senior team as Micheal Nobbs's understudy, but I refused.

"And when I enquired about the junior team's camp, they said that I have been removed," said the veteran, who 307 played international matches.

Mukesh, who was appointed the junior national coach after Harendra Singh left the job, is also hurt by the fact that Baljit is junior to him.

"A coach's job is technical one and I have been selected through proper process by Hockey India's development committee, headed by Pargat Singh. I would have no issues if any foreign coach or senior person had replaced me," he said.

The former right winger, who scored eight goals in the three editions of the Olympic Games he played in, said that the agreement with Hockey India was for a long-term contract.

"I had told Hockey India before my appointment that I wanted a tenure till 2013 and they agreed. I wanted to share my experience with the junior players and for that I needed time. I wanted to strengthen their basics," he concluded. 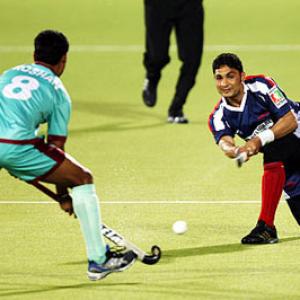