'Why can't we have I-League clubs in the ISL from the next season itself?' 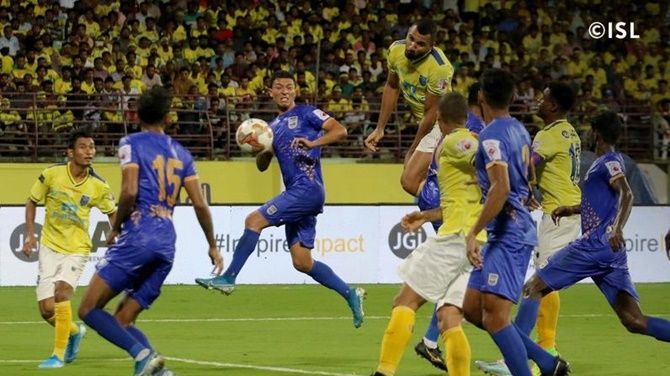 IMAGE: Action in the Indian Super League match between Kerala Blasters and Mumbai City, at the Nehru stadium in Kochi. Photograph: ISL

Welcome to the new age then: the deadlock's been broken, a solution seems in sight and the saga that is Indian football - despite the indescribable sordidness of the draw against Bangladesh earlier this week - seems headed for a happy ending. Except, there looks to be only one winner. So, the new age is much like the old, with those at the helm of affairs in a position to perhaps wield more power than ever before.

There was never going to be an easy fix to the mess that Indian football has become in recent years. The very idea of two leagues - one all glitter and gold, the other downbeat and doomed - was an awful one in the first place, and you didn't need a prophetic godman to tell you this was only going to lead to confusion among players, insecurity among smaller clubs, and, most damningly, disjointedness in the national team.

Now, of course, after much concern and uproar, the All India Football Federation (AIFF), with help from the Asian Football Confederation (AFC), is desperate to break ice with the I-League. The latter's status as the country's premier club competition was informally taken over by the Indian Super League (ISL) - a private Indian Premier League-style tournament floated by IMG-Reliance - when it opened to rave reviews five years ago.

The "appeasement" package, announced in Kuala Lumpur earlier in the week, now strips the I-League of its top-tier status entirely, effectively giving that title to the ISL, and along with it a coveted AFC Champions League play-off spot that was once reserved for the winners of the I-League. Instead, the I-League champions will now play in the AFC Cup, the second-rung continental competition in Asia.

"They have relegated an entire league for no fault of its own. We've done nothing wrong. In fact, on the field, ISL and I-League teams are equally good," says Ranjit Bajaj, owner of Minerva Punjab, the Chandigarh club that surprised many by winning the 2017-18 I-League title.

I-League teams will, however, be allowed in the ISL from 2020. Two teams - the qualifying criteria will be set by the ISL - will be "offered" a chance to compete next season. Even as little clarity exists, rumour has it that the two spots that will be made available will go to Mohun Bagan and East Bengal, solely on the basis of their being giant legacy clubs.

"The ISL has just given them a few sops. It's not a fair decision. I agree that the ISL promoters have a point because they've invested so much. But I-League team clubs are community-based teams that produce players and popularise the sport. I genuinely fear for the future of these small clubs," says football expert and commentator Novy Kapadia. He points to the fact that around 30 such clubs have folded up in the past decade.

Over the years, a major criticism of the ISL has been its outright refusal to follow a promotion-relegation system, something that encourages competition and is used by football leagues all over the world. In 2017, for instance, Bengaluru FC switched to the ISL despite finishing fourth in the I-League the previous season. The key differentiator here: the cash-rich JSW Group could afford a "bid" for its team, a move utterly unfeasible for a club the size of Aizawl FC, the I-League winners that year.

"Why wait for another five years for the promotion and relegation process to take place?" wonders Freddy Lalnunsanga, spokesperson for Aizawl FC. "Also, why can't we have I-League clubs in the ISL from the next season itself? Why such a long wait?"

"When there is no relegation, there is no fight. In the Premier League, a bottom club can challenge Liverpool or Manchester City because they must fight for their survival. Here, you know you're not going down," adds Kapadia.

Even as the ISL, a spectacle tailor-made for television, continues to be played on pristine surfaces inside plush stadiums, the I-League suffers from abject apathy: the pitches are miserable - and dangerous - the grounds have clearly seen better days and an overall sense - despite the players' best efforts on the pitch - of crippling malaise prevails.

That is perhaps partly why I-League teams regularly struggle to fulfill AFC and national licensing requirements - another condition set by the ISL for I-League teams wanting to make the grade. Of the 19 Indian clubs that applied this year, only six were granted licences.

The sole I-League outfit to succeed was Chennai City, the reigning champions; the other five belonged to the ISL. The failure to attain a licence normally attracts a fine.

"Smaller teams face a lot of challenges, but the licensing part is not such a big worry. All we want is that merit be given precedence over money," says Lalnunsanga.

A bigger issue may yet appear in the form of broadcasting. Star Sports, the official broadcasters, drastically cut down on live games last season, owing to odd kick-off times and a clear emphasis on ISL matches that have reserved prime time slots. Worse, for the upcoming season, there may be no live I-League football on the telly at all - the AIFF has told clubs to look for their own broadcasters. The season is just around the corner, but the AIFF is also yet to release the schedule.

"I've been sitting down with my players and they are devastated. They signed for a top-tier club, and now they'll be effectively playing in the second division. That will also hurt their prospects in the future - no top division club wants to sign a second division player," reveals Bajaj.

What the AIFF has perhaps most underestimated is the impact of this imbroglio on the national team. Against Bangladesh this week, many on the Indian team looked appallingly short of match fitness, since both the ISL and I-League are not yet in season. The two-league system has meant that Indian players play only half the number of competitive matches than the global average. A unified league - eight ISL teams and six from the I-League - will lead to greater game time and better preparation for international competitions.

Another casualty is scouting. Coaches in the national set-up prefer the ISL to spot players, but admit that the talent pool is limited due to the evident focus of managers wanting to play foreigners. "There has to be a cap on the number of foreign players. When will the Indian players ever get a chance?" argues Kapadia. "And because of the superiority enjoyed by the ISL clubs, agents sometimes lure players into signing contracts that aren't very good for them."

Kapadia cites the example of goalkeeper Debjit Majumder, who moved to ATK in the ISL from Mohun Bagan two seasons ago, hoping to realise his dream of playing for India. Unable to find a place in the ATK first XI, Majumder is now back with Bagan, his form and confidence both having taken a hit.

The ISL has its benefits, of course. Playing with established foreign stars - albeit over the hill - has helped local players flourish. A lot of them are now paid handsomely, in addition to gaining access to quality training, coaching and infrastructure that had never existed in Indian football until a few years ago.

A request for a comment from the promoters of the ISL - Football Sports Development Limited - went unanswered.

"There was some scepticism at the beginning, but the ISL has been a success. More investment, more awareness, more sponsors, better football - all this has been made possible by the ISL," reckons Shaji Prabhakaran, who heads Football Delhi, the governing body for football in the capital.

But amid all the fanfare, as Bajaj repeatedly says, the collateral damage may just have been too much. "Had this been an inclusive thing, it would have been the greatest idea ever.

Remember, football is a poor people's game. You can't have the elite looking down upon the poor. No one is winning at football that way."