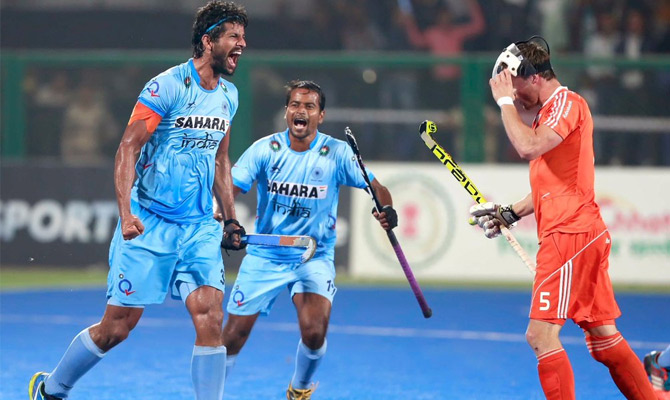 Hosts India beat defending champions Netherlands 3-2 in a penalty shootout to win the bronze at the Hockey World League Final in Raipur.

The win completed a remarkable turnaround for the hosts, who had trailed the world's second-ranked team 0-2 going into the third quarter and allowed the holders a last-minute equaliser.

It also avenged the 1-3 defeat to the Dutch in the Pool B game, one that ensured India finished last in the group.

It ended 5-5 in regulation time before India's star goalkeeper Sreejesh came up with a stellar show in the shootout.

Mirco Pruijser put the European champions ahead in the ninth minute and Niek van der Schoot made it 2-0 with a brilliant reverse flick in the 25th minute.

However, the hosts allowed the Dutch back into the game, Mink van der Werden scoring a brace.

In the shootout, the visitors went ahead. Danish Mujtaba scored but was denied by the television referee for showing hockey stick to the goalie. Thereafter, Amir missed out for India but Sreejesh made two saves to keep the hosts in the match.

Birendra Lakra made it 1-1 in the shootout and Sardar Singh ensured it was 2-2.

Then, Sreejesh saved again, and though Manpreet missed his chance, India were awarded a penalty stroke after Dutch goalie was found obstructing Manpreet.

And Rupinder Pal made no mistake, sending the crowd to delirium.

Amid all the excitement, the emcee announced 'India wins gold' in what was a bronze medal match.

India had ended the group phase in last place before bouncing back to beat Group A winners England in the quarters. A loss to Belgium in the semi-finals ended their titles hopes but a remarkable comeback against the Dutch ensured they finished with a medal.