The opening day of the Hero Hockey World League Final witnessed a major upset as lower-ranked Argentina put up a spirited display to outclass London Olympic silver medallist Netherlands 5-2, while world number two Australia eked out a narrow 3-2 win over Belgium in Pool B at the Major Dhyan Chand National Stadium on Friday.

The 11th ranked Argentines signalled their intentions early when they took the lead in just the second minute of the game through a penalty corner conversion by Gonzalo Peillat.

But three minutes later, Argentina regained their lead with a diving field effort from Facundo Callioni (8th) to go into the breather with their nose ahead.

After the change of ends, both the teams adopted defensive tactics, at least for the first 15 minutes of the second half.

But Netherlands drew parity in the 50th minute through a field goal from Seve van Ass, son of national coach Paul van Ass, who scored with a reverse stick shot from left of the goal. 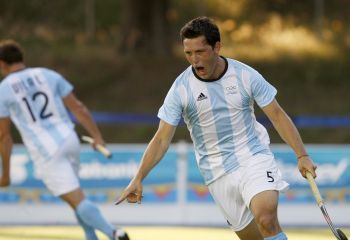 Argentina added insult to Netherlands' injury when they were awarded a penalty stroke and Juan Ignacio Gilardi (67th) made no mistake to make the scoreline 5-2.

Meanwhile, in the opening match of Pool B, Australia rode on a late field goal from Jacob Whetton to beat Belgium 3-2.

Tom Boon (33rd) and Thomas Briels (53rd) sounded the board for Begium.

Despite the tenacity of Belgium who fought back twice, the Kookaburras pocketed full three points from the game, courtesy Whetton's goal in the penultimate minute of the match.

The first half started with Australia putting early pressure on the Belgian defence. Even though the Kookaburras controlled the proceedings, they failed to create any meaningful chances.

The sparse crowd at the National Stadium had to wait till the 32nd minute to witness the first penalty corner and Govers skillfully converted the chance to give Australia the lead.

However, Australia's lead barely lasted a few seconds as Boon scored a field goal from the next move to draw parity for Belgium.

Australia regained their lead in the 48th minute when a counter-attack resulted in anoher penalty corner which was perfectly taken by Govers to score his second goal of the day.

Trailing by a goal, Belgium raised the tempo of the game in serach of an equaliser and managed to get it five minutes later through Briels.

Australia kept up the pressure with relentless attacks and secured the winner in the dying moments of the game through Whetton.