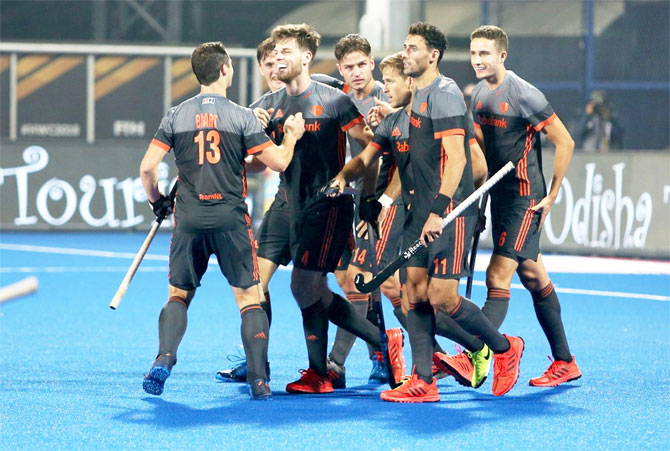 IMAGE: Netherlands' players celebrate a goal against Canada in their cross over match at the hockey World Cup in Bhubaneswar on Tuesday. Photograph: Hockey India/Twitter

Three-time champions Netherlands mauled lower-ranked Canada 5-0 in the final cross-over match to set up a quarter-final clash against hosts India in the men's hockey World Cup, in Bhubaneswar on Tuesday.

Netherlands will now play India in the last-eight round on Thursday.

In the match between World No. 4 Netherlands and World No.11 Canada, the Dutch were early aggressor as they made continuous forays.

The Canadians, on the other hand, preferred to sit back and defend while looking for counters to surprise their opponents.

Canadian goalkeeper Andrew Charter too made a number of brilliant saves to keep his side in the hunt.

The Netherlands' first chance came in the ninth minute but Charter came out of his line to pull off brilliant save and deny Bob de Voogd.

After 15 minutes of resistance, Canada's resolute defence finally broke down seconds into the second quarter when an unmarked Lars Balk sliding try from Glenn Schuurman's pass found the back of the net past Charter.

Seconds later Netherlands got a golden chance to double their lead when they were awarded a penalty stroke but Charter once again came to his side's rescue to keep away Jeroen Hertzberger's try.

The Netherlands, however, doubled their lead in the 20th minute through Robert Kemperman, whose slap shot from top of the circle found the Canadian net for the second time in the game.

Chances came thick and fast for the Netherlands as Thierry Brinkman was the next to be denied by Charter before the Canadian goalie pulled off another fine save to keep away Hertzberger's reverse hit.

The Dutch resumed the second half at the same pace and continued to mount attacks on the opposition goal and in the process secured back-to-back penalty corners in the 38th minute but the chances went wasted.

The Netherlands tripled their lead in the 40th minute when Van Dam scored from a rebound after Seve van Ass's initial shot was saved by Canada keeper Charter.

A minute later, the Dutchmen extended their lead when Brinkman pushed in an open goal after being set up by Kemperman, who beat three Canadian defenders with his brilliant stick work.

After wasting another penalty corner, Netherlands made the scoreline 5-0 in their favour two minutes from full time through Van Dam's second goal of the day.

Pakistan's miserable campaign at the men's hockey World Cup finally came to an end after Olympic silver medallists Belgium thrashed the four-time champions 5-0 in the third cross-over match at the Kalinga Stadium in Bhubaneswar on Tuesday.

Staring the match as favourites, the Red Lions toyed with the Pakistani defence which somehow managed to hold on in the opening 10 minutes.

While Pakistan will pack their bags and return home, Belgium will take on Germany in the quarter-finals on Thursday.