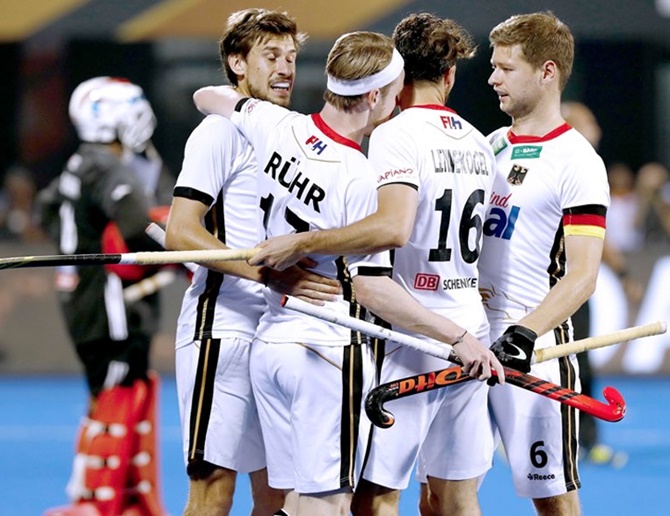 Olympic bronze medallist Germany defeated Malaysia 5-3 in a keenly-contested match to maintain their all-win record and seal a direct quarterfinal spot by topping Pool D at the men's hockey World Cup, while Pakistan suffered a 1-5 defeat against the Netherlands but still sneaked into the knock-out stages, in Bhubaneswar, on Sunday.

Germany finished on top of Pool D with nine points from three games, ahead of second placed the Netherlands (6 points) and third-placed Pakistan (1 point).

While the Germans were through to the quarterfinals, the Netherlands and Pakistan managed to qualify for the cross-overs round.

As per the format of the tournament, the top team from each of the four pools will directly qualify for the quarterfinals while the second and third placed sides will play cross-over matches against teams of other pools for the remaining four last eight berths.

Even though Malaysia (1 point) finished on same points as Pakistan, the Asian Games silver medallist crashed out of the tournament because of their inferior goal difference.

The Germans joined two-time champions Australia, Olympic champions Argentina and hosts India in the quarterfinals. The other four places of the last eight round will be decided from the cross-over matches.

England play New Zealand while France will be up against China in the cross-over matches on Monday, while Belgium face Pakistan and the Netherlands will take on Canada in the other cross-over games on Tuesday.

In the match between the Netherlands and Pakistan, the Dutch were by far the better side as they made repeated forays into their rival citadel.

Pakistan played catch-up hockey and looked a disjointed unit, having no idea what to do with the ball when it's in their possession. They mostly relied on counter-attacks to surprise their higher ranked opponents but the vast gap of quality between the two sides was quiet evident on the turf.

World number 4 Netherlands started on a bright note and secured their first penalty corner in the fourth minute but it was wasted.

Three minutes later, Brinkman gave the Netherlands the lead with a field strike.

But Pakistan bounced back strongly and earned three back-to-back penalty corners, from the last of which Bhutta scored off a rebound after Ali Mubashar's flick was saved by Dutch goalie Pirmin Blaak.

In the second quarter, both the Netherlands and Pakistan traded a penalty corner each but failed to extract anything from the opportunities.

Three minutes from half-time, the Dutch restored their lead through Verga who scored a fine field goal after a brilliant one-two touch play with Seve van Ass.

The Netherlands started from where they left after the change of ends and extended their lead in the 37th minute with a diving effort at the far post from de Voogd, who tapped in a pass from Jeroen Hertzberger.

The Dutch continued their onslaught and secured a couple of penalty corners in quick time and from one such chance Jorrit Croon scored to make the scoreline 4-1 in the European side's favour.

Van der Weerden then converted a penalty corner a minute from the final hooter to round off the scoreline and end Pakistan's agony.

Earlier in the day, Tim Herzbruch (2nd, 59th minute) and Christopher Ruhr (14th, 18th minutes) scored two goals each while Marco Miltkau (39th) scored the other one for the world number 6 Germans.

Both Germany and Malaysia had their chances but it was the Germans who were more precise with their finishing skills.

The Germans started brightly and raced to a 3-0 lead inside 18 minutes through goals from Herzbruch and Ruhr.

The Malaysians tried to make a valiant fightback and managed to reduce the margin to 2-3 in the 28th minute through goals from Rahim and Noor.

But, the clinical Germans capitalised on Malaysia's defensive errors when Miltkau deflected in a Niklas Wellen's perfect lay-off in the 39th minute.

The Malaysians did not give up and narrowed down the scoreline to 3-4 when Rahim converted another penalty corner.

The Germans had the last laugh when Miltkau scored from a counter-attack just a minute from the final hooter to dash any hopes of a Malaysian comeback.

Both the teams had numerous scoring opportunities in the form of penalty corners. While Malaysia earned as many as eight penalty corners, the Germans secured seven in the match.