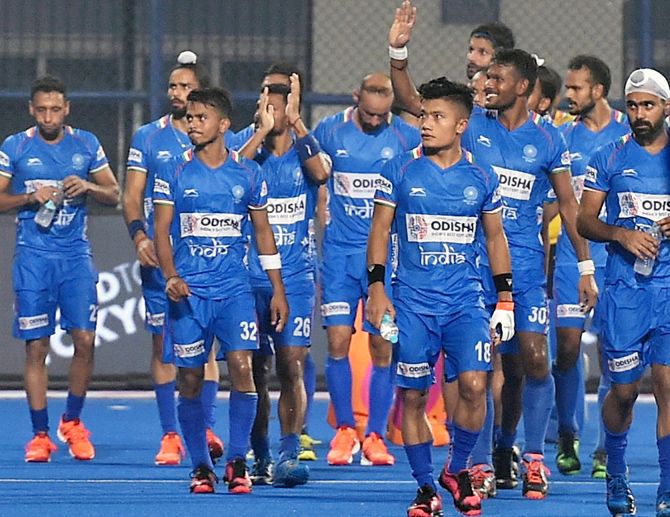 Mandeep Singh struck twice as a below-par India struggled past minnows Russia 4-2 in the first-leg of the two-match hockey 2020 Olympic Qualifier, in Bhubaneswar, on Friday.

Despite the class and vast gap in world rankings between the two teams, World No 22 Russia dished out a fighting effort to surprise the hosts and keep the difference of goals to just two.

World No 5 India still can't breath easy as Russia clearly showed they are capable of creating an upset in the second and final match on Saturday. The aggregate winner at the end of the two-match qualifier will seal its place for next year's Tokyo Olympics.

Russia had the first shot at the goal in the third minute with Pavel Golubev showing quick-thinking from a free-hit, taking it himself but his backhand effort was blocked by India goalkeeper PR Sreejesh.

Two minutes later, Russia goalkeeper Marat Gafarov was called into action by India captain Manpreet Singh, whose first shot was saved but was fouled as he attempted his follow-up. The hosts made good use of the video referral to get a penalty stroke and Harmanpreet made no mistake.

India were dominant but it was far from cakewalk for the hosts as two minutes later Sreejesh was forced to make another save before the Russians won a penalty corner. However, the chance went wasted because of a miss-trap at the top of the circle from Iaroslav Loginov. 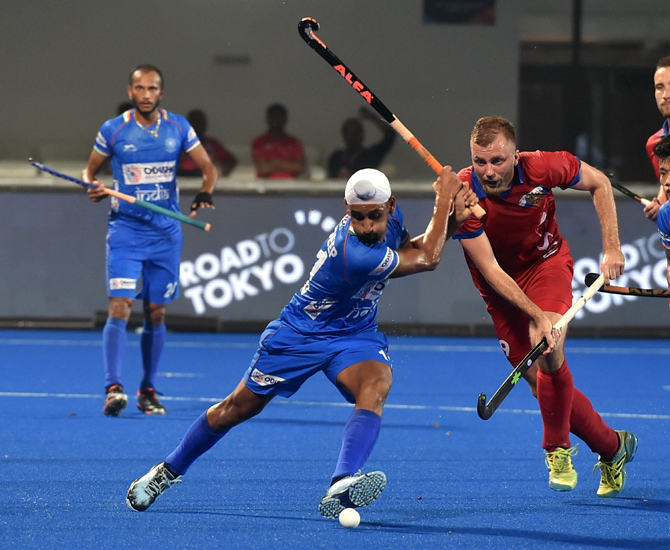 But two minutes into the second quarter, India were in for a shock as Russia equalised through a field strike from Andrey Kuraev, who after receiving an overhead pass, cut across the top of the circle before guiding his shot into the bottom left corner past India's second goalkeeper Krishan Bahadur Pathak.

Minutes later, a diving Sergey Lepeshkin almost handed Russia the lead but his angled deflection from Evgeny Artemov's pass from the right, missed the top corner of the Indian goal by a fraction.

India, however, restored their lead in the 24th minute through Mandeep, who thrashed home a backhand strike into the bottom left corner past Russia goalkeeper Gafarov.

Just at the stroke of half-time, India secured their first penalty corner but Harmanpreet's try was comfortably kept away by Gafarov as the hosts went into the break with a slender 2-1 lead.

The Russians continued their good show and made a bright start to the third quarter creating two good chances, the second of which almost produced the equaliser. Marat Khairullin received the ball unmarked in the Indian circle and smashed a blistering backhand strike just wide of the goal.

Russia matched their faniced opponents stick for stick but India, somehow, managed to hold on to their slender lead at the end of the third quarter.

After wasting their second penalty corner, India finally got some breathing space by extending their lead in the 48th minute through Sunil, who scored from close range following a goal-mouth scramble.

Mandeep scored his second goal of the day in the 53rd minute from a counter attack to make the scoreline 4-1 in favour of the hosts.

Russia scored a vital second goal in the final minute of the match through a penalty corner conversion by Semen Matkovskiy.