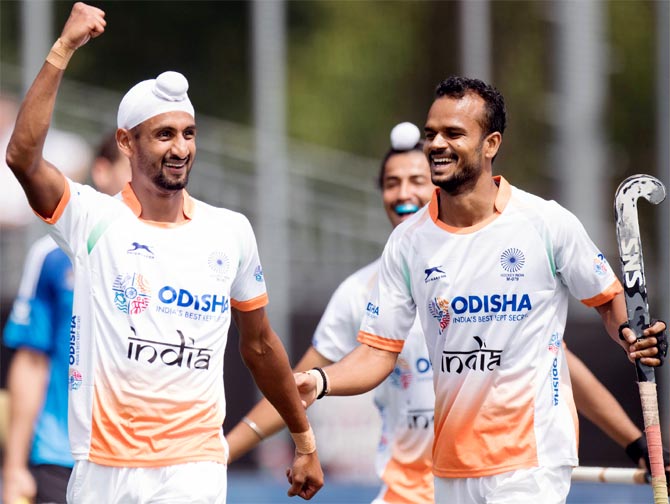 Defending champions India continued their unbeaten run as they beat South Korea 5-3 in the Pool A match to storm into the semi-finals of the men's hockey competition at the 18th Asian Games in Jakarta on Sunday.

By virtue of this result, India are leading Pool A with 12 points from four victories. The title holders will play lowly Sri Lanka in their last pool engagement.

Even though it was India's fourth consecutive win in the pool, it was a far from impressive display from Harendra Singh's men against the Koreans.

In their previous three games, the Indians had thrashed Indonesia 17-0 before registering a record 26-0 win over Hong Kong China and 8-0 victory over Japan.

Going by international ranking, the gulf between World No. 5 India and their no.14 opponents was quite evident in the first two quarters, but the Koreans gained confidence after the change of ends, and surprisingly, controlled the game in the third quarter.

But it was India who started with a bang and scored as early as the opening minute when Rupinder scored from the spot after being awarded a penalty stroke.

The Indians continued to press hard and doubled their lead in the fourth minute through Chinglensana, who neatly deflected in a Rupinder free hit from outside the circle.

Immediately after the resumption of the second quarter, an unmarked Lalit beautifully pushed in Simranjeet Singh's aerial ball from deep to make the scoreline 3-0 in favour of India.

But, after the change of ends, the Koreans looked a different side and dominated the Indians.

Korea reduced the margin in the 33rd minute when Jung scored from a penalty corner variation and then two minutes later, their captain again found the back of the net to stun the Indians.

The holders, however, regained their composure and grip over the proceedings in the fourth quarter, which resulted in two beautiful reverse hit field goals from the sticks of Manpreet and Akashdeep.

Korea earned three back-to-back penalty corners in the dying minutes of the game, courtesy a defensive error from Rupinder, and Jang converted in the third attempt.

India's chief coach Harendra Singh will not be a happy man with his wards' performance, especially with the fact that they wasted five penalty corners despite having four dragflikers in the squad.