India ended the year on a sordid note as they failed to defend their title, losing 4-5 to arch-rivals Pakistan in a high-soring final of the second Asian Champions Trophy hockey tournament in Doha, on Thursday.

Sans experienced players, a young Indian outfit put up a brave fight before surrendering before their much-experienced opponents, whom they had defeated 2-1 in the round robin stages of the tournament.

It was a neck-and-neck battle between the two sub-continent hockey giants as both the teams scored goals at will before Pakistan used their experience to good effect to emerge as the winners.

By virtue of this win, Pakistan have avenged upon their loss at the hands of India in the title clash of the inaugural edition of the event last year in Ordos, China.

Muhammad Waqas (7th minute, 57th) and Mohammad Imran (48th, 64th) scored a brace each for Pakistan while Shafqat Rasool (42nd) sounded the board once.

The match started on a fast paced note with both the teams going for attack from the onset.

However, it was Pakistan who took the lead when Waqas deflected home from their first penalty corner in the seventh minute after Raghunath blocked Mohammad Rizwan Sr inside the circle.

But the lead was short lived as Sunil equalised through a field effort, his fourth goal in the tournament, two minutes later.

Raghunath rose to the occasion and converted a penalty corner in the 21st minute to see India go into the  breather with a 2-1 lead.

But Pakistan came out all guns blazing in the second period and restored parity in the 42nd minute when Rasool scored from a field effort. Pegged by the goal, Pakistan went all out attacking and their efforts bore fruit when Irfan's high drag-flick from a penalty corner crashed into the Indian goal past custodian PR Sreejesh to give the neighbours a 3-2 lead.

The match witnessed a see-saw battle between the two sub-continental giants as Chandi brought India back into the match in the 55th minute, finding himself at the right place at the right time to restore parity.

But two minutes later Waqas restored Pakistan's lead with his second goal of the match before Rupinder equalised for India.

However, the joy was short-lived for the Indians as five minutes later Irfan was once again at the thick of things, converting another short corner to score the winner for Pakistan.

Thereafter, the Indians pressed hard for the equaliser but it was not be as Pakistan defended stubbornly to deny Michael Nobbs' boys any inroads. 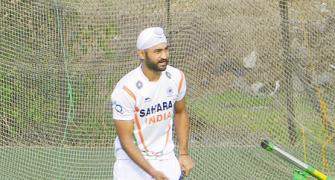 My goal is a podium finish for India in Rio: Nobbs
India lose to England in Lanco hockey opener 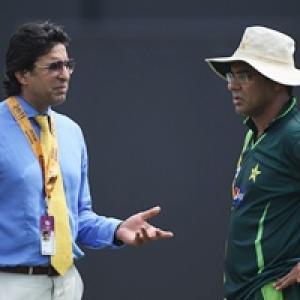