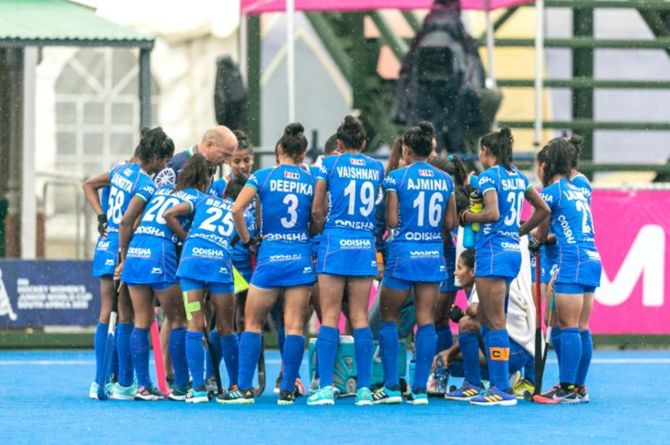 A podium finish on its mind, the Indian women's hockey team would look to bury the ghosts of a disastrous World Cup campaign by steam-rolling minnows Ghana in the Commonwealth Games opener on Thursday.

The Indian women are clubbed in Pool A alongside hosts England, Canada, Wales and Ghana, while Australia, South Africa, New Zealand, Scotland and Kenya complete Pool B.

Just like their male counterparts, the Indian women returned empty-handed from the last edition of the Games in Gold Coast, finishing fourth after being routed 0-6 by England in the bronze medal play-off match.

Going into Games, the Indian women must have been haunted by their below-par effort in the recently concluded World Cup in Spain and the Netherlands, where the Savita Punia-led side finished a disappointing ninth.

And the Janneke Schopman-coached side would be desperate to prove that it is a far better side than what the recent results indicate. They would be itching to prove their detractors wrong about the perception that a historic fourth place finish in last year's Tokyo Olympics was a mere fluke.

The Indian women would also be hoping to break their 16-year medal brought in the Games here. The India's last medal -- a silver -- in CWG came in 2006 Melbourne.

The only other medal that Indian women bagged in the Games since hockey introduction in 1998 was a gold in the 2002 edition in Manchester.

Besides the brilliant Olympic campaign, the Indians would also be boosted by their creditable third place finish in their maiden Pro League outing this season.

But to finish on the podium, the ninth ranked Indians will have to get the better of world No.3 Australia, fifth ranked England and world No. 8 New Zealand, who are also strong medal contenders.

In the last edition of the Games, New Zealand won the gold ahead of Australia and the Trans-Tasman rivals would fancy their chances in this Games too.

Australia have dominated women's hockey in CWG, bagging as many as four gold medals, one silver and a bronze.

While it is expected to be a cakewalk for India in their opening two pool games against world No. 30 Ghana, and world No. 24 Wales (on Saturday), the Savita's side will face its first real challenge against England on August 2 before finishing their pool campaign against No.15 Canada.

With the top two teams from each pool progressing into the semifinals, India and England are clear favourites from Pool A unless something drastic happens.

But the recent World Cup has brought to light some chinks in India's armour, which they need to address quickly.

For Indian women, while penalty corner conversions remain a major concern, the forward line too needs to pull up its socks.

In the recent World Cup, the Indians created plenty of scoring chances from open play as well as penalty corners but squandered most of the opportunities.

Coach Schopman would be expecting a much-improved show from her forwards and drag-flicker Gurjit Kaur.

In the other Pool A match of the day, Canada will take on Wales.