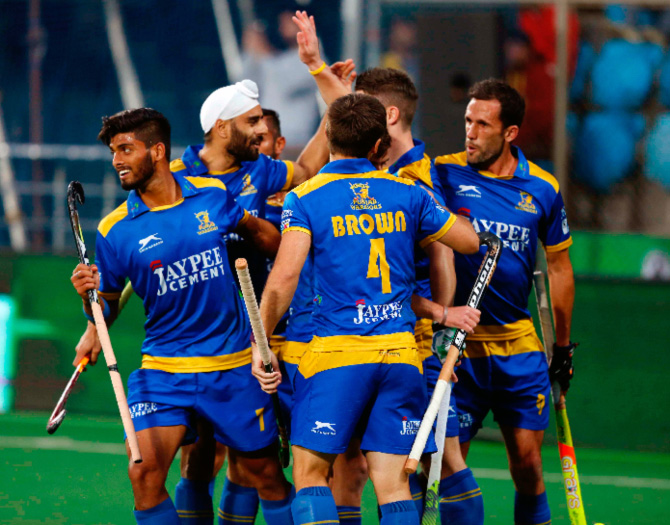 Simon Orchard and Satbir Singh scored a field goal each as Jaypee Punjab Warriors registered a thumping 4-1 victory over Kalinga Lancers to climb to the second position in the Hockey India League, in Bhubaneshwar, on Sunday.

Orchard and Satbir scored in the space of 10 minutes in the 48th and 58th minute respectively after the Lancers took the lead through a penalty corner conversion by Glenn Turner in the 42nd minute.

By virtue of this win, Punjab Warriors have moved to the second spot in the standings with 22 points from seven games. The Lancers too have similar points from as many matches but they are atop the table because of superior goal difference.

The first quarter of the match started with attacking intent from the Lancers but Punjab Warriors showed good defensive skills to keep the hosts at bay as both the teams looked dangerous on counter attacks.

The second quarter started with the home team getting defensive as the visitors raised their pace in the game.

Punjab Warriors started pressing hard but the possession was still majorly controlled by the Lancers who were looking very strong in the midfield.

The Punjab outfit came close on many occasions including four failed back-to-back penalty corners, which were beautifully saved by Andrew Charter leading to a goalless first half.

The third quarter saw both the teams pushing hard for a goal. The Lancers finally managed to break the deadlock in the 42nd minute when star Turner made no mistakes in converting a penalty corner, giving the home team a much needed 1-0 lead.

The final quarter started with the Lancers trying hard to capitalise on their lead in the early moments but an excellent interception by Sardar Singh foiled the home team's ambitions and the visitors scored a field goal through Simon Orchard in the 48th minute handing the visitors a 2-1 lead.

The Lancers pressed really hard after this but the Punjab defence was way too strong for them to break. In the process Punjab Warriors scored their second field goal in the 58th minute through Satbir to swell their lead.

The Lancers will host defending champions Ranchi Rays at the same venue on Monday, while Punjab Warriors will travel to Lucknow to face Uttar Pradesh Wizards on Wednesday.