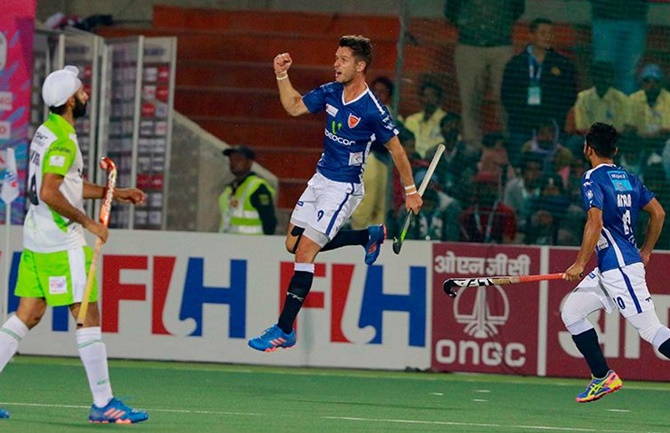 Dabang Mumbai and Kalinga Lancers entered the finals of the fifth edition of Coal India Hockey India League by winning their respective semi-finals against Delhi Waveriders and Uttar Pradesh Wizards at the Sector 42 Hockey Stadium in Chandigarh on Saturday.

Table toppers Dabang Mumbai, led by their skipper Florian Fuchs, rode on a 26th minute field goal by Dutch import Robbert Kemperman to beat Delhi Waveriders 2-0 and set up a summit clash with the Lancers in the finals on Sunday.

Lancers defeated Uttar Pradesh Wizards via penalty shootout after both teams were locked 4-4 as the match went down to the wire. It was only in the sudden death that Lancers won 4-3.

While defending champions Punjab Warriors have already been knocked out of the competition, both Mumbai and Lancers have never won the title earlier.

For nearly 20 minutes, both Mumbai and Waveriders played cautiously before Mumbai earned their first penalty corner four minutes before the half-time.

Earlier, Lancers Australian goalkeeper Andrew Charter, who won man-of-the-match for his efforts, saved several goals for his team, not only in the alloted time but also in the penalty shootout.

Akashdeep Singh of the Wizards pumped in a goal in the dying minutes of the alloted time after the Lancers were leading 4-2.