After playing a knock of 152 runs against Pakistan in the first innings of the third and final Test against Pakistan, wicket-keeper batsman Jos Buttler said that having a positive outlook has served him well over the past few weeks.

England's Buttler also admitted that he was worried about getting dropped from the side two matches prior to the third Test against Pakistan.

"A couple of games ago I was thinking I was about to get dropped, I've certainly questioned myself in the last few weeks. I've found a good headspace to hang in there. You've got to maintain that belief in yourself and this just proves you're never far away. You're never too far away from good things or bad things. Things can change fast. It's that positive outlook and belief that you can do good things that has served me well in the last few weeks," ESPNCricinfo quoted Buttler as saying.

Buttler was involved in a 359-run stand with Zak Crawley in the first innings of the third Test and as a result, England put up a score of 583/8 with Crawley scoring 267 runs.

This partnership between Buttler and Crawley was England's highest fifth-wicket partnership in Test cricket.

"It's nice to prove to myself that I can bat for that long. I was just trying to make it last as long as possible. It's definitely the first time I've faced that many balls," Buttler said.

"But it's been nice to have a real training block. It's not something you have very often. You're often planning your training around the next match in a couple of days. To start gradually thinking about things you'd like to improve and focus on your batting, it's been a really beneficial thing for me to work a few things out," he added.

England had won the first Test against Pakistan and as a result, the side is leading 1-0 in the three-match series.

The second match of the series had ended as a draw after rain played spoilsport on all the days of the Test.

BCCI President and former India captain Sourav Ganguly has heaped praise on England batsman Zak Crawley, who hit 267 against Pakistan in the third Test in Southampton, calling the youngster a class player.

Playing in only his eighth Test, the 22-year-old Crawley hit 267 in a record-setting partnership with fellow century-maker Jos Buttler (152) on Saturday, taking England closer to a Test series victory over Pakistan.

The 393-ball knock put him in 10th place in the all-time list of top scores by an English player.

"England have found a very good no 3 in Crawley," Ganguly tweeted

"Looks a class player... hope to see him in all formats regularly."

Only playing the third and final Test because Ben Stokes has returned to his native New Zealand for family reasons, Crawley staked a claim to become a regular No. 3 batsman in the England team with his double century.

His 359-run partnership with Buttler is a record for the fifth wicket for England in Tests and it is joint-sixth highest ever. 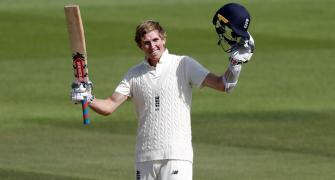