Has Davis Cup door been bolted on Paes with Bhupathi's comments?

'The team will be chosen the day before the draw. I am not sure who is going to play doubles. I am not sure if I am going to have any doubles players at all but whatever needs to win I will make sure that happens' 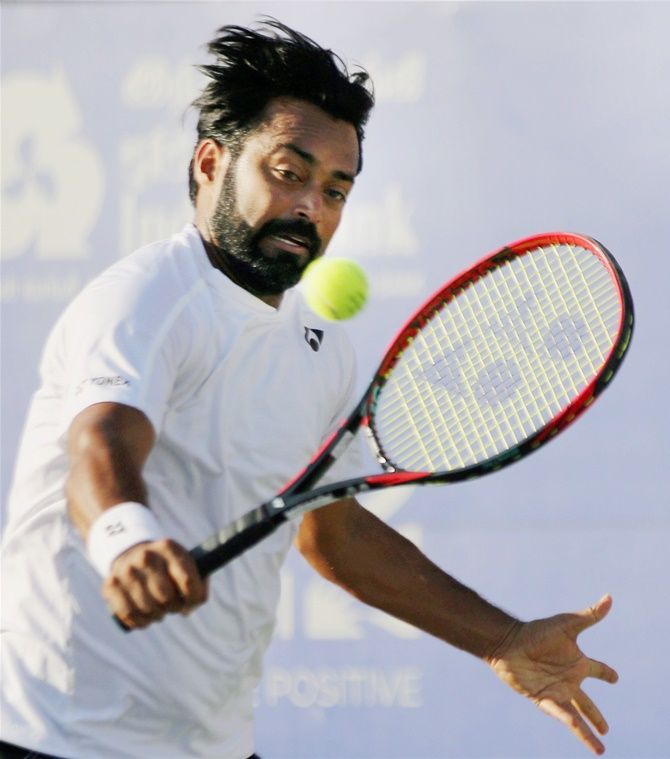 Set for his Davis Cup debut as non-playing captain, Mahesh Bhupathi prefers to have a combination of three singles players and a doubles specilalist, which means either Leander Paes or Rohan Bopanna will make the cut against Uzbekistan in April.

Bhupathi said the team will be finalised close to the tie but as of now, considering the strong challenge that Uzbekistan pose for India, a 3-1 combination look like ideal.

"If you ask me to tell you right now, because of the depth of the Uzbekistan team, I would prefer to play three singles and a doubles, but there is no reason it can't change in next few weeks," Bhupathi told PTI in an exclusive chat.

AITA chose a six-member squad that includes both Paes and Bopanna, and left it on Bhupathi to pick his preferred final four.

Asked what will determine the selection of one doubles player, if at all he goes with 3-1 combination, Bhupathi did not divulge his strategy.

India's first ever Grand Slam winner, made it clear that he is keeping his options open of having all singles specialist in his team leaving both senior pros Bopanna and Paes out of the final four.

"The team will be chosen the day before the draw. I am not sure who is going to play doubles. I am not sure if I am going to have any doubles players at all but whatever needs to win I will make sure that happens."

When asked that the option of picking four singles out of the current squad, may not be practical, Bhupathi said: "We do have. Sriram Balaji plays singles as well as doubles. We can have two (singles players), we can have three, we can have four. I will decide in April," Bhupathi, winner of 12 Grand Slam titles, said.

Bhupathi also said that it does not affect him if media talk about his frosty relationship with Paes, with whom he has a 23-match unbeaten streak in Davis Cup in doubles.

"I only heard it from you guys. It does not affect us, we are experienced campaigners."

The 42-year-old said, he has a vision for the Indian Davis Cup team and he would like to take along all the players with him.

"I spoke to 12 players from Saketh to Sumit, Purav, Divij, to Jeevan. All of them are going to be part of process going forward, to get us back into the World Group. I have told them when squad is chosen, there is not guarantee they will play but I am expecting them to support the team even if they don't play. They were all very reciprocative and supportive," he said.

Bhupathi also emphasised that players' fitness will be of paramount importance in his reign as captain and he will keep a close watch on them before the April tie.

"I want to make sure that whoever plays is match fit. Next four weeks they are all playing different parts of the world, we will be tracking how they are doing. Match fitness and off court fitness are both important aspects on Davis Cup weekend," he said.

Saketh Myneni had pulled out of the New Zealand tie in the last minute due to fitness issues and Vishnu Vardhan had to answer an SOS call from AITA to play doubles with Paes.

Bhupathi said it was not this incident that forced him to bring new fitness guidelines for the players as they have to now undergo fitness assessment in Mumbai before making themselves available for Davis Cup.

"Not really. It is a very basic idea which every team in the world follows, unfortunately it was never implemented in our country."

Bhupathi seemed realistic when asked if he thinks with the current set of players, India can cross the final hurdle.

"This team is a little different, at least two times they had (retired) Somdev. We have a lot of depth now. We have different players to choose from and we are definitely going to try," he said.

Bhupathi said it was important for Yuki to remain injury-free to get back to top-100.

"We will have to wait see. Yuki is coming from an injury and he has done well at the beginning of the year. Need to keep our fingers crossed, we know he is capable of being a top-100 player, so we have to hope he stays healthy then he automatically gets back to were he belongs."