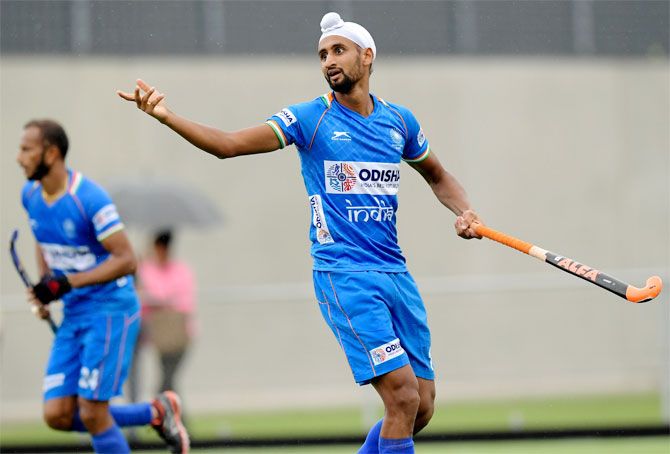 IMAGE: Harmanpreet scored one of his two goals through a penalty corner. Photograph: Hockey India/Twitter

It was not a great start for the Indian team as they went a goal down in the third minute through Spain's opening attack. Iglesias Alvaro scored the opening goal of the match to put the pressure on the Indians.

However, high on confidence from their two wins in the opening two matches, India responded with a quick equalizer in the fifth minute as Akashdeep Singh scored a field goal to make it 1-1.

The Indians looked comfortable in possession during the latter stages of the first quarter and forced the Spanish goalkeeper into making a save off a penalty corner.

SV Sunil also marked his return to the team with a wonderful strike in the second quarter to give India a 2-1 lead. In the 20th minute the forward ran inside from the right flank, and struck the ball past Quico Cortes.

Spain tried to make a comeback into the match, but could not create enough opportunities before the half-time break as India maintained their 2-1 advantage.

The Indian team started the third quarter with a flurry of good opportunities inside the Spanish circle, and it was in the 35th that they benefited from it as forward Ramandeep Singh scored India's third goal of the afternoon.

Harmanpreet converted a penalty corner to make it 4-1 in India's favour.

The last quarter saw a similar tale as India produced some outstanding team moves with their pressing and quick passing. They scored their fifth goal of the match when Harmanpreet step up yet again to convert another penalty corner.

They beat the hosts 2-0 on Thursday in their tour-opener and then hammered Spain 6-1 on Saturday.

Indian women held hosts Great Britain to a 1-1 draw in the second match of their Tour of United Kingdom held in Marlow,  England, on Sunday.

India's Lalremsiami scored the equalising goal in the 32nd minute after Great Britain had taken an early lead in the match.

India were out of the blocks quicker, and earned a couple of penalty corners within the first two minutes. Britain's custodian Maddie Hinch was at hand to ensure India didn't get an early lead though.

Soon it was Great Britain, who reciprocated, winning a penalty corner from a swift counter.

Despite a smart save by the Indian defence, an infringement meant the hosts were awarded a penalty stroke, which was duly converted in the 8th minute, giving them a 1-0 lead. It was that slender lead they took into the first break.

Much like the first quarter, it was India again, who took the initiative early in the second period, winning another short corner and Hinch pulled off another save.

In the third quarter, India finally restored parity after Lalremsiami finished off a counter attack to draw the scores level. With both teams locked at a goal apiece and all to play for, the game opened up. Neither the defence caved though as the teams went into the final quarter tied at 1-1.