Israel's Artem Dolgopyat and Brazil's Rebeca Andrade chalked up Olympic firsts for their countries with gold medal wins in gymnastics at the Tokyo Games on Sunday.

Dolgopyat won the men's floor exercise by a whisker, edging Spain's Rayderley Zapata to give Israel its second ever Olympic gold and first in gymnastics.

Andrade, a surprise silver medallist in the all-around competition, pulled off another shock in the women's vault as she went one better to give Brazil its first ever women's gymnastics gold.

American Mykayla Skinner, filling in for reigning Olympic and world champion Simone Biles -- who dropped out over mental health issues but was on Sunday cheering her compatriot on from the stands -- grabbed silver.

Dolgopyat, twice a world silver medallist in the same event, posted a score of 14.933, the same as Zapata. But the Israeli took top spot on the podium because his routine had a higher degree of difficulty.

China's Xiao Ruoteng took the bronze for his third medal of Tokyo 2020.

Israeli Prime Minister Naftali Bennett was among the first to congratulate Dolgopyat praising the 24-year-old for making "blue and white history".

"How we waited to see the Israeli flag raised," tweeted Bennett, who later called Dolgopyat in the mixed zone.

The gold was just the second at the Olympics by an Israeli athlete, the other coming in sailing at the 2004 Athens Summer Games.

"It means a lot to me," said Dolgopyat.

"I’ve been dreaming about it since I was six years old. I’m really happy that I was able to do it and give my country the best gift."

The competition was once again missing its star attraction as American Biles scratched from both the uneven bars and vault finals.

Biles, 24, has not been seen in competition since dropping out of the team event on Tuesday after just one vault saying later that she was wrestling with mental health issues and a crisis of confidence.

Nina Derwael of Belgium won the uneven bars final at the Tokyo Olympics on Sunday. 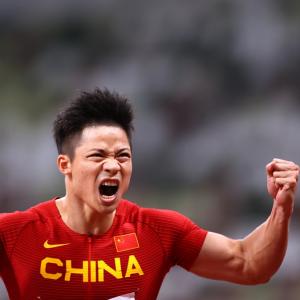