Iran's Sepehr Boroujeni Safari emerged as the surprise gold medal winner ahead of the Indian fancied duo of Gurpreet Singh and Jitu Rai, who settled for silver and bronze respectively in the men's 10m air pistol event at the 8th Asian Air Gun Championship in New Delhi, on Tuesday.

Iranian Safari, who was seventh in the qualification, shot 198.7 in the final to emerge as the surprise gold medallist ahead of world number five Vladimir Issachenko of Kazakhstan and world number eight Rai. 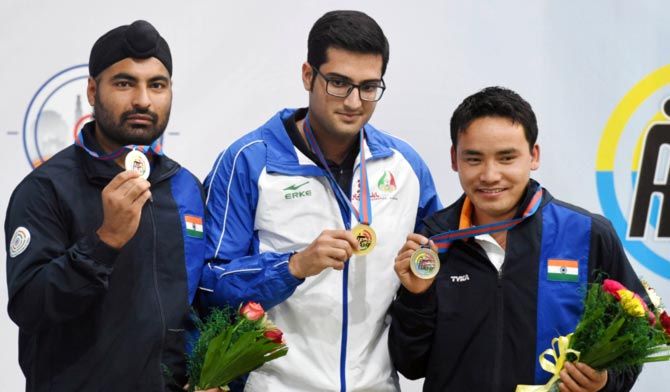 Gurpreet, ranked 26th, fired 197.6 to win the silver ahead of Rai, who finished third with a total score of 177.6 at the Karni Singh Shooting Range. Rai had topped the qualification with 583.

But it was a different ball game in the finals as the Iranian started on a rousing note, firing 10.8 to Rai's 10.6.

There was disappointment for the third Indian shooter in the fray, Omkar Singh, as he was the first one to be eliminated and finished eighth.

Despite Safari's 10.8, Rai led the field after the first three shots with 31.3. The World Championship silver medallist and Asian Games gold medallist maintained the lead in the next three shots, as Issachenko shot to the second position.

Rai kept the lead for a while before Safari jumped to the top spot with a 10.5 even as the Indian managed a modest 9.6.

Even as an intriguing tussle was on between Safari and Rai, Gurpreet slowly built the lead midway through the competition, and suddenly, he found himself in the second place with a 10.4.

Rai finally found his golden touch firing an impressive 10.9, the only one to reach the mark in the final, but that was not enough and he had to contend for bronze with Gurpreet managing 10.5.

In the last attempt, Gurpreet shot another 10.5, but Safari’s (8.9) lead was too much to be overtaken. There was a 1-2 finish for India in the 10m air pistol event for juniors, with Sumedh Kumar (199.1 in the final) and Hemendra Singh Kushwah (195.2) winning the top two prizes on offer. Kushwah's effort was special as he was competing in his maiden international tournament.

Mohamad Ahmed of Bangladesh bagged the bronze in the junior section.

India's Mohit Gaur (176.0) managed to finish third in the 10m air pistol youth category and the country won the team silver in this category.