The stars were out in force for the Australian Open men's singles final in Melbourne on Sunday, between Rafael Nadal and Daniil Medvedev.

In the stands was a very relaxed Aussie spin legend Shane Warne while sporting power couple Candice and David Warner appeared in great spirits on a date night.

Celebrities made their way to the Australian Open to cheer on Rafael Nadal. Take a look: 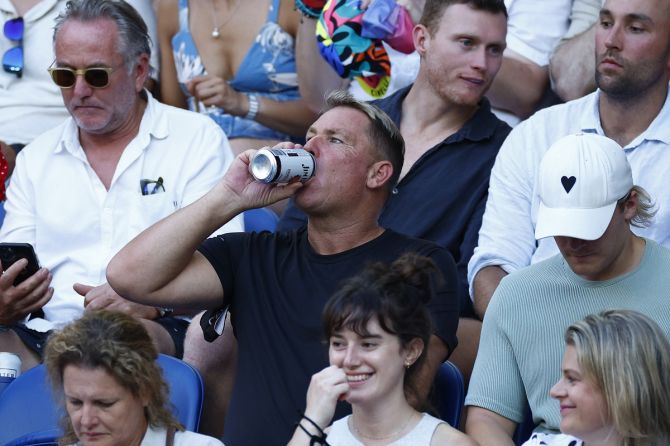 On Saturday, World number Barty said her dream came true after she ended Australia's 44-year wait for a home winner at the Australian Open by beating American Danielle Collins 6-3, 7-6(2) in the final on Saturday.

Barty staved off a fightback from Collins to pick up her third Grand Slam title, thus becoming the first Australian to win the event since Chris O'Neil captured the women's title in 1978. Gladiator star Russell Crowe had a front row seat to cheer on Barty. Mental disintegration was his way of steamrolling opposition teams in his glory days as Australia's cricket captain. So, when Steve Waugh was spotted at the Australian Open semi-final between Daniil Medvedev and Stefanos Tsitsipas on Friday, we wonder what he thought of Medvedev's thrilling win over the Greek to book a spot in the final against Rafael Nadal on Sunday.

Waugh was seen watching intensely while Russian Medvedev came back from a set down to claw back into the contest and down Tsitsipas 7-6 (5), 4-6, 6-4, 6-1 to reach his second successive Melbourne Park final.

Waugh was also spotted at the women's semi-final where compatriot Ashleigh Barty beat USA's Madison Keys on Thursday, to make the final.