Germany's Thomas Lurz became the only man to have struck gold in all four open water events when he battled through the pain of the final sprint to edge the 25-km race at the world championships in Barcelona on Saturday.

The balding 33-year-old from Wuerzburg, who took silver in the 10-km race and bronze over 5-km earlier in the week as well as gold in the 5-km team event, slapped the overhead finish marker to register a time of four hours, 47 minutes and 27 seconds after a marathon slog around the city's picturesque harbour.

Brian Ryckeman of Belgium came home just four tenths of a second later to take silver in a time of 4:47:27.4 followed by Russia's Evegenii Drattcev in third with 4:47:28.1. 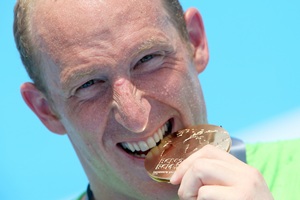 "These championships have been great for me," Lurz told reporters.

"I was lucky to be in the middle (for the sprint) and I had a little bit of space.

Lurz's compatriot Angela Maurer was unable to celebrate her 38th birthday with another gold for Germany after Italy's Martina Grimaldi edged her by a tenth of a second in the women's race following more than five hours in the water.

Maurer, who won 25-km bronze at the world championships held in Barcelona a decade ago, was devastated after initially being declared the winner, but said she was still pleased with silver.

"I don't know what happened," a dripping Maurer, her eyes still showing the marks of her goggles, told reporters.

"I just tried to touch and maybe I didn't touch strong enough," she added.

"I'm a little bit sad but I did a great race so second place is also fine. I got a medal and that was the important thing."

Lurz dominated the 5-km distance at previous world championships, winning seven straight golds between 2005 and 2011, but had never medalled in the 25-km version.

He won gold in the 10-km in 2004 and 2009 and is also the only athlete to have won an open water medal at two Olympic Games, taking silver in the 10-km swim in London last year and bronze in Beijing in 2008.

© Copyright 2020 Reuters Limited. All rights reserved. Republication or redistribution of Reuters content, including by framing or similar means, is expressly prohibited without the prior written consent of Reuters. Reuters shall not be liable for any errors or delays in the content, or for any actions taken in reliance thereon.
Related News: Germany, Beijing, Thomas Peter Lurz, Alexander, Martina Grimaldi
SHARE THIS STORYCOMMENT
Print this article

PHOTOS: Watch out for the HOTTEST Formula One babe!