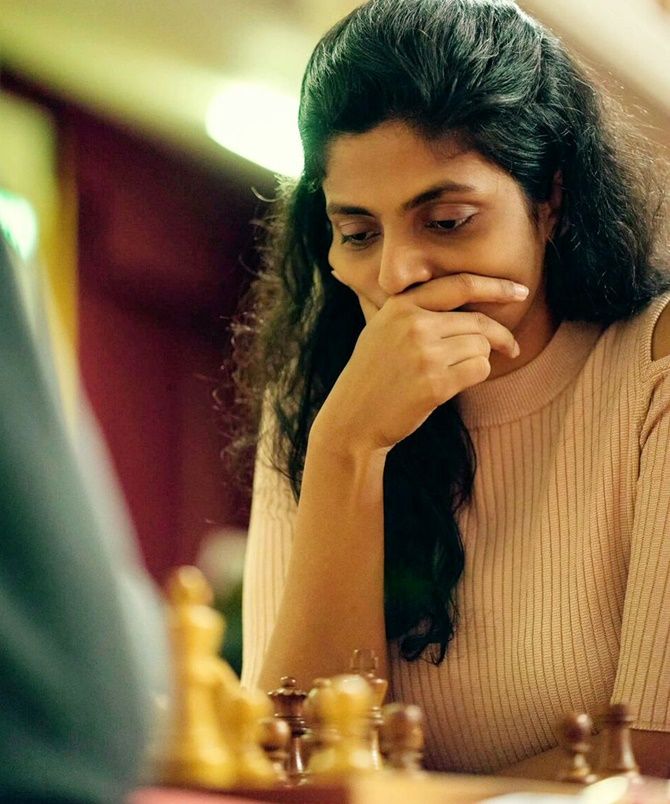 Indian chess ace Dronavalli Harika held top-seed Mariya Muzychuk of Ukraine to a draw in the 11th and final round of the FIDE Women's Grand Swiss chess tournament in Riga, Latvia, to finish fifth and qualify for the next women's Grand Prix cycle.

Harika, who started the event as the fourth seed, shared a point with Muzychuk in 31 moves late on Sunday to end with seven points and remained undefeated in the tournament.

She was tied for joint third spot with the Ukrainian but eventually settled for fifth place on the basis of the tie-break score.

Sarin, who remained unbeaten in the event, drew his final round match against the talented Russian Daniil Dubov while Harikrishna signed peace with Yuriy Kuzubov of Ukraine.

Sasikiran, who had done well to be among the joint leaders for a while, lost to Ukraine's Anton Korobov to finish with six points.

GM Raunak Sadhwani drew with Hans Moke Niemann of USA in the final round to secure 5.5 points and finished 57th.

In all-Indian clash, D Gukesh and R Praggnanandhaa drew in 34 moves. Both finished the event with five points. Praggnanandhaa took the 72nd spot while Gukesh ended up three spots lower.

In the women's event, only Vantika Agrwal apart from Harika managed a draw while the others -- R Vaishali, Divya Deshmukh and Padmini Rout -- lost their final round games.

Naturalised Frenchman Fioruzja scored eight points from 11 rounds after a draw with Grigoriy Oparin and finished half a point ahead of the field. World no 2 Fabiano Caruana took the second place with 7.5 points.

Tingjie dominated and finished on top with nine points, 1.5 points ahead of the rest. The second and third places were shared by Elisabeth Paehtz of Germany, who also secured her final GM norm and Zhu Jiner of China, both with 7.5 points.

The 18-year-old secured the three required GM norms in just 24 days by playing three tournaments on the trot. In all the three events, his rating performances were at 2599 and above.

The Maharashtra player also touched the 2500 Elo rating mark during the tournament.

To achieve the GM title, a player has to secure three GM norms and cross the live rating of 2,500 Elo points.

He won five games, drew three and lost one to Rudik Makrarian (Russia) to take the second place with 6.5 points in the GM tournament in Serbia which concluded late on Sunday.

Markarian won the top prize on the basis of a better tie-break score though he finished equal on 6.5 points with Gupta in the 10-player field. IM S Nitin of India with 5.5 points took fourth place.

"Been a great weekend for Indian chess again ! Congrats to our new entrant ... Now how long till we get to our 100th GM??" he tweeted.

"Nagpur based teenager Sankalp Gupta becomes the 71st Grandmaster of the country after completing the requirement to be next GM of the country by securing the final norm at Serbia. AICF congratulate Sankalp for the remarkable achievement," AICF tweeted.