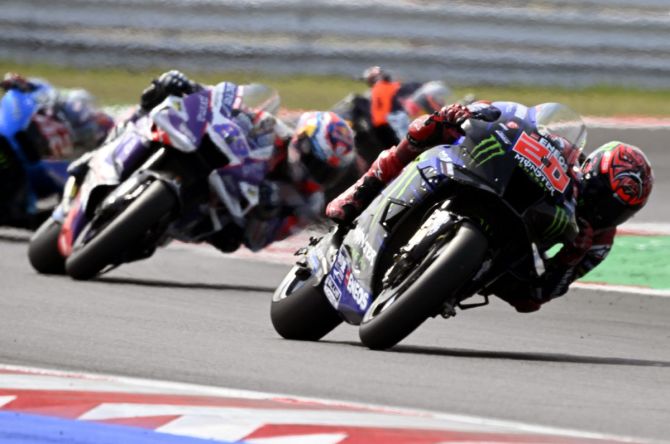 IMAGE: The MotoGP is most likely to be held at the Buddh International Circuit in Noida, once home of the F1 Indian Grand Prix, which was discontinued due to financial, tax and bureaucratic hurdles. Photograph: Mirco Lazzari gp/Getty Images

MotoGP, the pinnacle of two-wheel racing, could come to India in the winter of 2023 if all goes ahead as planned, providing a massive boost to the stagnant motorsport scene in the country.

The master agreement between MotoGP commercial rights owner Dorna and Noida-based race promoters Fairstreet Sports could be signed as early as next week.

Dorna MD Carlos Ezpeleta and CEO Carmelo Ezpeleta will be in New Delhi on Wednesday and they are expected to make an official announcement on the Grand Prix of Bharat.

The round is most likely to be held at the Buddh International Circuit in Noida, once home of the Formula One Indian Grand Prix, which was discontinued due to financial, tax and bureaucratic hurdles.

The FIM homologation of the track will be done only after the agreement is signed between MotoGP rights owner and race promoters.

Fairstreet Sports COO Pushkar Nath said they have done their homework for the organisation of the high-profile race, taking into consideration what went wrong with Formula 1 nine years ago.

"India is the largest two-wheeler market in the world. Everyone has a connect with bikes. It has aspirational value. MotoGP is one of the most watched sporting events," Nath said.

"We have taken all the precautionary steps for the India round. We ave taken all the steps to ensure we can race in India for a long period. We are looking at a winter round for India next year."

"I had mentioned in our AGM recently that talks were on between both the parties and we have been kept in the loop. I have also had a meeting with the race promoters. They know what they are doing and what is needed to pull off an event of this scale.

"I hope the master agreement between Dorna and Fairstreet is signed soon and then we can move on to track homologation and the organisation of the race. The support of the government will be key here," said Ebrahim.

Around 5000 people work on a MotoGP weekend which incudes races in junior classes Moto 2 and Moto 3. The race will not only put Uttar Pradesh on the global map but is expected to boost tourism.

Nath said the race is not possible without the support of government and he is thankful to both the state and Centre for their help in getting the event to India.

"It is like hosting the Commonwealth Games with 5000 people working on the race itself leaving aside the fans and everyone else. The BJP government both at state and Centre have been really helpful.

"They also want to boost tourism in India. People will be coming from Europe and other parts of the world and it would be shown live in 200 countries," said Nath.

Fairstreet Sports will be paying millions of dollars to Dorna for the race every year. It wasn't sustainable for the Jaypee Group when it hosted F1 but Nath said his company has factored in the huge costs involved.

"Not just readying the race track, the biggest challenge will be to create the infrastructure for the race," he said.

Besides taxation, custom clearance emerged as a big issue during the F1 days and the concerned stakeholders can't afford to go wrong on this front again.

Former FMSCI president Vicky Chandhok, who was at the helm when F1 came to India, said seamless entry of the equipment is a must for the success of the event.

"The arrival of the equipment has to be seamless. If that happens, the word will spread that India has changed and it has become feasible to organise races here, then it could also lead to return of Formula 1. It is a massive market at the end of the day. NASCAR too may come in.

"We have already hosted the Asian Road Racing Championship in the past. So MotoGP has to be the next step," he added.

The all-electric Formula E race is also coming to Hyderabad next February and if MotoGP can go ahead as planned, Indian motorsport will finally get what it's desperately waiting for.