'We have to understand one thing, government can't dictate the federations or get involved in the process of selection.' 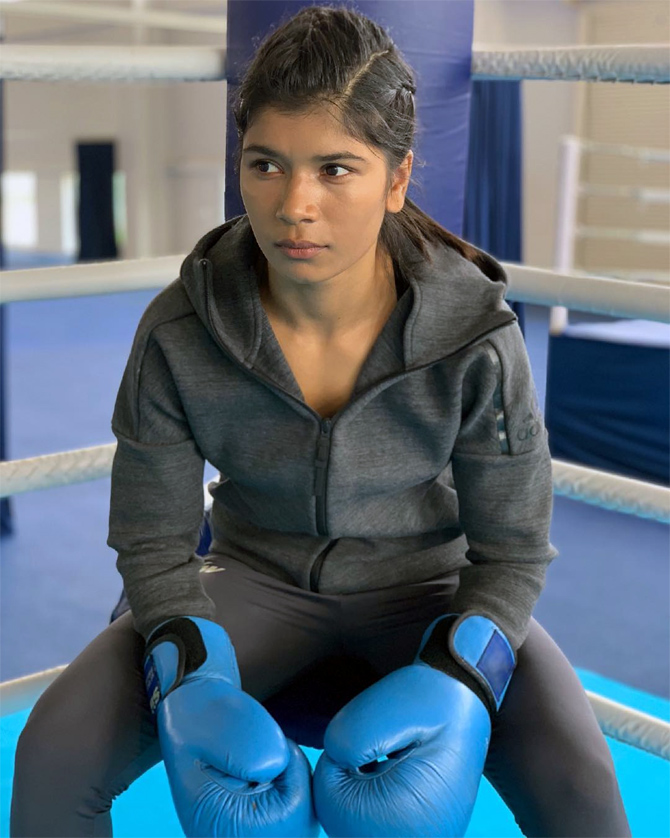 IMAGE: Former junior World champion Nikhat Zareen had written a letter to Sports Minister Kiren Rijiju, demanding that she be given a trial bout against MC Mary Kom before the Indian squad for next year's Olympic qualifiers in China is decided. Photograph: Nikhat Zareen/Instagram

Sports Minister Kiren Rijiju made it clear that the government would not interfere in selection matters but advised the Boxing Federation of India (BFI) to be transparent and resolve the Nikhat Zareen-Mary Kom in the best possible manner.

Former junior World champion Nikhat Zareen had written a letter to Rijiju on Thursday, demanding that she be given a trial bout against Mary Kom before the Indian squad for next year's Olympic qualifiers in China is decided.

The BFI wants Mary Kom (51kg) to compete in qualifying event in China after she won her eighth World Championships medal in Russia.

"We have to understand one thing, government can't dictate the federations or get involved in the process of selection," Rijiju said on the sidelines of the felicitation program of the Indian women's boxing team, in New Delhi on Saturday.

"If there are anomalies and certain things which are not in the interest of sports we make advisory suggestions. Olympic charter is clear that government shouldn't interfere in the functioning and administration of a federation.

"Everybody has the freedom to seek some sort of redressal to their grievances and as a minister we have to respond positively. So I will advise the federation to be transparent and take a decision which is in the interest of the nation. But we would not get into the details of it."

Asked about the proposed National Sports Code, Rijiju said: "Yesterday I got information that court has given certain direction. I have told the sports federation, 'don't create a situation where people go to the court'. Like Archery association is de-recognised, there is a problem with Gymnastic Federation.

"I don't want sports bodies to face problems from IOC (International Olympic Committee) or their respective international federations. When we create problem, then only someone will intervene. Why should court intervene in sports matters?

"When the federations have groupism, fights against each other and conduct parallel elections, in that circumstances court will intervene. So let's not create problems.

"I have already stated to all federations that we are coming with an appropriate sports code which will govern everybody without any issue."

Rijiju also praised the Indian women's boxing team that returned with four medals from the World Championships in Russia.

"We have won four medals at this boxing World championship, it will inspire others," he said.