Jyoti Randhawa was ranked in the top 100 of the Official World Golf Ranking several times between 2004 and 2009. 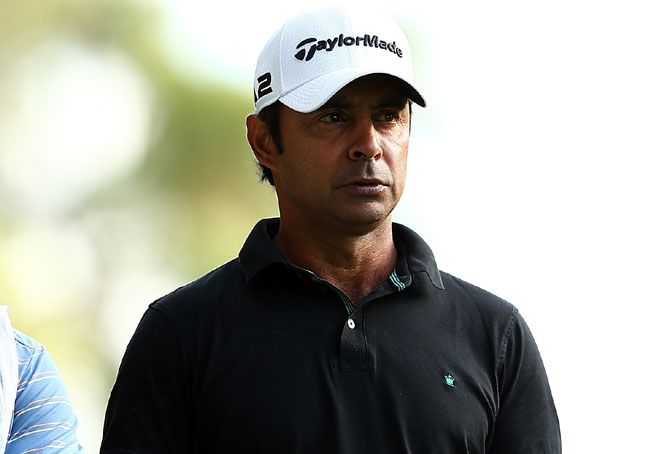 Ace golfer Jyoti Randhawa, arrested on charges of poaching in the Dudhwa Tiger Reserve's protected area in Uttar Pradesh, was sent to 14-day judicial custody, on Wednesday, an officer said.

Equipment used for hunting, a telescope-mounted .22 bore rifle, 80 live cartridges and three empty shells, a deer hide and some cash were seized from his possession, field officer Ramesh Pandey said.

Randhawa (46), ranked among the top 100 of the Official World Golf Ranking several times between 2004 and 2009, has a farm house in Dudhwa-Katarniaghat forest area and was said to be staying there for the past few days.

The officer said a luxury SUV vehicle with registration number HR-26 DN-4299 was also seized from the golfer whose full name is Jyotinder Singh Randhawa.

Police slapped serious charges under various sections of the Wildlife Protection Act, 1972, and the Indian Forest Act, 1927 against him. He was later produced before magistrate Shikha Yadav, who remanded him in judicial custody for 14 days.

Pandey said another person, identified as Mahesh Virajdar, was arrested along with Randhawa near the Motipur range of Katarniaghat in the reserve. He too was sent to judicial custody for 14 days.
The magistrate refused to grant bail to both of them.

Virajdar has served the Indian Navy as a Captain, a post equivalent to Colonel in the Indian Army and Group Captain in the IAF. He was court martialled four years ago on charges of committing certain financial irregularities.

Randhawa, who turned professional in 1994, has been a well-known name in Indian golf. He won 16 professional titles in all, eight of them on the Asian Tour. He also has a Japan Tour title to his credit and topped the Asian Tour Order of Merit in 2002.

He is a three-time winner at the prestigious Indian Open. But his form had been on the wane and the last time he won a title was back in 2009 -- the Thailand Open. Randhawa won seven titles on the Professional Gold Tour of India (PGTI), making him a celebrated name in the domestic circuit.

The Delhi-based golfer was married to actress Chitrangada Singh for 13 years before the couple got divorced in 2014. They have a son, named Zorawar, from the marriage.

The Katarniaghat Wildlife Sanctuary, which is about 200 km from state capital Lucknow, is a part of the Dudhwa Tiger Reserve.

It covers an area of 400.6 sq km in Terai belt of Bahraich district.

In 1987, it was brought under the purview of the 'Project Tiger'. It provides strategic connectivity between tiger habitats of Dudhwa and Kishanpur in India and the Bardia National Park in Nepal. PTI CO