Shiv Kapur cracked a stunning six-under 66 that included seven birdies against one bogey to move up to tied 28th after the third round of the Rolex Trophy on the European Challenge Tour.

Kapur, who won the season's first effort in Kensville Challenge in Ahmedabad earlier this year, has now shot 73-73-66 to be four-under through 54 holes as he moved up from 40th to 28th. 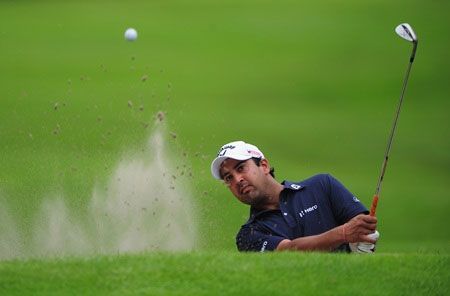 Kapur opened with a bogey on first, but then quickly recovered with a birdie on second and then three more on fifth, sixth and eighth to turn in three-under. On the back nine he found three more birdies on 12th, 15th and 18th for a day's work of 66.

Jens Dantorp grabbed a share of the lead on the third day as he posted a flawless round of 66 at Golf de Geneve to move to 16-under par alongside the in-form Portuguese Jose-Filipe Lima, who had signed for the same score earlier in the day.

Turning in 34 with birdies at the 12th and 17th holes, the Swede added further gains at the first and second, where he sunk a 25-footer across the green. After picking up a further shot at the fifth hole, Dantorp holed another huge putt at the eighth for his sixth and final birdie of the day.

Spaniard Adrian Otaegui is in third place on 15 under par after shooting a round of 66, which included eight birdies.

Elsewhere,  Indian golfers SSP Chowrasia and Jeev Milkha Singh failed to make the cut at the Johnnie Walker Championship at Gleneagles after turning in modest cards in the second round at Edinburgh.

Chowrasia starting on the 10th, was one-under through the first-nine and looked set to make the cut following his first round 71. On the back-nine, he dropped bogeys on the second and the ninth to miss the cut by two strokes.

Jeev, who shot a 72, also started on back-nine with one-under for first-nine. Then he lapsed into errors with four bogeys on the second nine to drop down and miss the cut.

Argentina's Ricardo Gonzalez claimed a one shot lead at the halfway stage.

On the Centenary Course, which will host next year's Ryder Cup at The Gleneagles Hotel, Gonzalez birdied his last five holes to card a second consecutive 65 for a 14 under par total of 130.

Austria's Bernd Wiesberger could not match the brilliant finish of Gonzalez, but still covered the back nine in 31 to add a 66 to his opening 65 and finish 13 under.

English duo Mark Foster and Tommy Fleetwood are 11 under after rounds of 67 and 65 respectively, with Foster admitting his search for a second European Tour victory 10 years after his first is always on his mind.