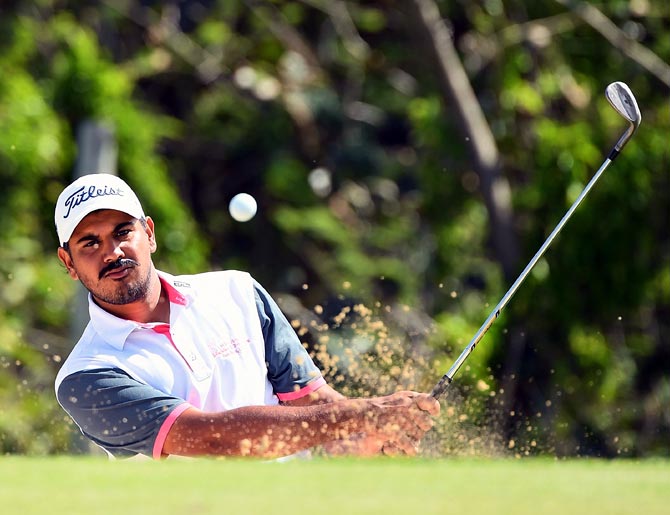 Natadola Bay: Gaganjeet Bhullar turned in yet another steady round of three-under 69 to overturn a six-shot deficit into a one-shot lead on a blustery day at the Fiji International on Saturday.

Overnight leader Ben Campbell had a major meltdown dropping four shots between fourth and eighth followed by a double on 16th and a bogey on 17th.

His five-over 77 saw him slip to fifth, but is only two behind the new leader Bhullar and one behind the second placed bunch of four golfers.

Ajeetesh Sandhu, the only other Indian to have made the cut, shot 72 with one birdie, one eagle, one bogey and one double bogey.

Bhullar, despite being only one shot ahead, will start as the big favourite on Sunday as the collective Asian Tour wins of his four closest pursuers are fewer than his eight on the Asian Tour.

But in a close contest like this no one within four or five shots can be ruled out, especially if the wind is up on the final day.

Pilkadaris has two wins, the last of which came in 2005, while Dodt has won once each in 2010 and 2016. McLeod has never won a pro, while Felton, too has none on Asian Tour, but two on Australasian Tour.

Bhullar has been in great form, with three top-10 finishes in last four starts -- the fourth was T-11. His latest win in Macao last October also came in windy conditions.

Bhullar was six behind at the start, but he got off to a hot start with birdies on first two holes to close the gap between him and Campbell, whose birdie on third kept the distance to five shots.

Then came Campbell's nightmarish stretch of four bogeys in five holes. Bhullar, meanwhile, was moving up and he first got a share of the lead with Dodt with a birdie on 12th. Another birdie on 17th gave him sole lead as others failed to catch up.

Bhullar was successful in staving off danger by saving some great pars. The others did get birdies but they also dropped shots.

"I had a great start to the day. I started with two good birdies and then I kept on hitting the ball really well and the ball was in play throughout the round," Bhullar said.

"Today my striking was really, really good. Despite the windy conditions, I kept the ball in play, and I holed a lot of really tricky putts today.

"Like the par save on No. 9 and No. 10, that were basically the game changers today. It wasn't an easy round of golf today. Wind was howling, it was gusty, especially on the back nine."

South Africa's Ernie Els, a four-time Major champion, had a superb round of a 69 to haul himself back into contention and at 5-under he is seventh and only three behind leader Bhullar.

Another man who cannot be counted out is Justin Harding (72), the hottest player in Asia with two wins in as many starts, is currently T-11 at 3-under.

Harding has won his first two starts on Asian Tour in last three weeks. In last eight starts – in Asia and Africa - Harding has four wins, three Top-6s and a T-18. 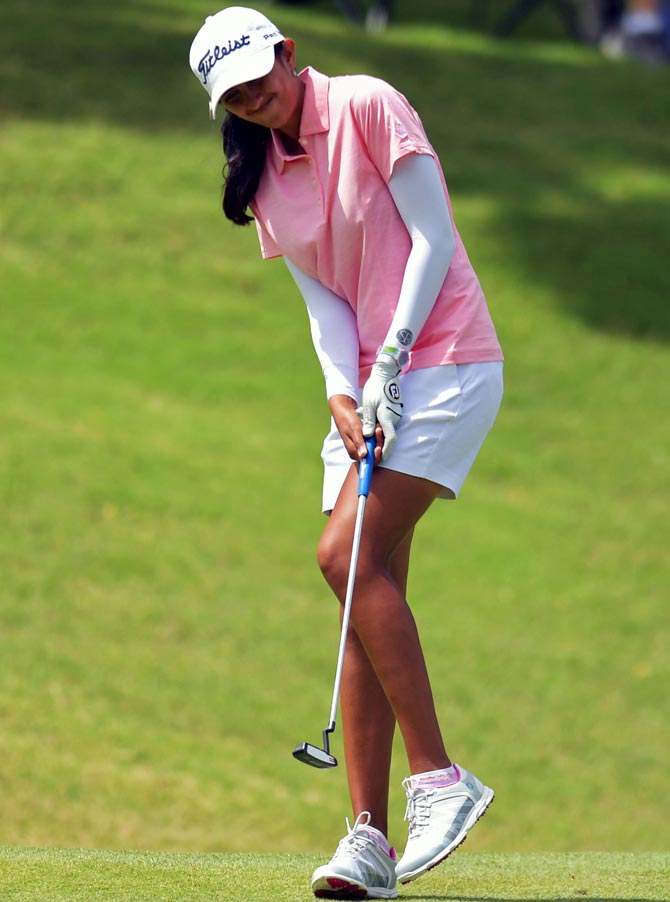 IMAGE: Aditi Ashok made the cut at the Women's British Open for the first time in three attempts. Photograph: Drew Hallowell/Getty Images

Lytham St Annes: India's Aditi Ashok continued to battle with links golf but at least managed to overcome one hurdle by making the cut at the Ricoh Women's British Open for the first time in three attempts.

Aditi, who had missed the cut in previous two British Open appearances and the Scottish Open last year, made the cut at Scottish Open, but finished way down at tied 59th spot.

This week with two successive rounds of even-par 72, she assured weekend action. At even-par for 36 holes, Aditi is now tied 41st.

This week at Lytham, Aditi, a three-time winner on Ladies European Tour, has not found too many fairways, but still battled to 72-72. She had four birdies and four bogeys on the first day and two each on the second.

Meanwhile, Thailand's Pornanong Phatlum took the sole lead with a second successive five-under 67 to get to 10-under. She is one ahead of, Minjee Lee, Mamiko Higa and Georgia Hall.

Phatlum has not dropped a bogey in 36 holes as she took a one-stroke lead in search of her first win on Tour. Rookie Georgia Hall, the JLPGA's Mamiko Higa and four-time winner Minjee Lee sit one behind at nine-under par.

Phatlum achieved her earlier fame in India at the Hero Women's Indian Open which she won a record three times in 2008, 2009 and 2012. The first two times it was on Ladies Asian Tour, while the third time it had moved to being a co-sanctioned event with Ladies European Tour.

Phatlum has never finished better than tied seventh in any of her previous 20 Majors and if she wins, she could become the fourth Thai to win on the LPGA this year. Sisters, Ariya Jutanugarn (2) and Moriya Jutanugarn and Thidappa Suwannpura have won once each. Curiously, Thidappa has also won the Hero Women's Indian Open in 2013. 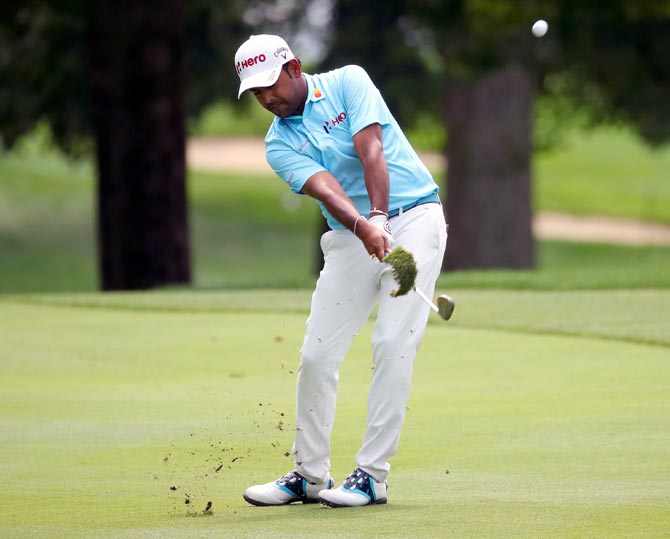 Akron: India's Anirban Lahiri battled to an even-par 70 to slip to tied 16th spot after the second day of the World Golf Championships-Bridgestone Invitational golf tournament.

Following on his first round score of five-under 65, Lahiri is now five-under for 36 holes but slipped from overnight tied seventh to tied 16th.

Overall, Lahiri had three birdies and three bogeys for a par round at the Firestone Country Club on Friday.

Meanwhile, young Shubhankar Sharma had a miserable second day at the event with a disappointing nine-over 79 that took him to 11-over 151. He was lying bottom on 71st spot and had no birdies against nine bogeys on the second day.

Race to Dubai champion, Tommy Fleetwood had seven birdies in his 63 as he took a share of the lead alongside Ian Poulter (62-67) and Justin Thomas (65-64) at the halfway stage.

After putting beautifully in first day when he also hit some great approaches, things were not as simple on the second day for Lahiri.

He hit seven of 14 fairways and 10 of 18 greens in regulation but missed a couple of short putts, one from five feet and two others from 10 and 14 feet.

On the first day, he had no misses inside 10 feet but in the second round Lahiri did chip on the eighth hole, his second last hole of the day.

Starting at the par-4 10th, Lahiri's 117 yard approach to seven feet set himself up for the birdie on the hole, but on the par-4 11th, his tee shot went 292 yards to the left side of the fairway.

His second shot then went 117 yards to the right greenside bunker, and he came out needing to hole a 20-footer for par and he failed for a bogey.

On par-4 13th hole, Lahiri hit his approach shot to inside four feet for a birdie, but missed his par putt from 6 feet on 17th for a 3-putt bogey from 26 feet.

Lahiri bogeyed sixth, but holed a chip from 38 feet for a birdie that ensured a par round.