Golf: Mixed day for Indians, Kapur best with 70 in Sicily

Shiv Kapur was the best placed Indian on day one at the Sicilian Open golf as he was tied 29th while Jeev Milkha Singh and SSP Chowrasia struggled on a mixed day for India.

Kapur shot a one-under 70 while both Jeev and Chowrasia dropped strokes on the closing 17th and 18th and ended with 72 and 75 respectively.

Jeev was tied 64th and Chowrasia, playing his first event on the European Tour since his Avantha Masters win last month, was way behind in tied 122nd.

Kapur opened with a birdie and then dropped in a row, but steadied himself to three more birdies and one bogey for a 70.

Jeev was one-under through 16 and then dropped a shot each on 17th and 18th.

In the case of Chowrasia, he was par after 16 and then had a bogey on 17th and double bogey on 18th.

Spain's Jose Manuel Lara overcame an early double bogey to finish day one of the Sicilian Open tied for the lead with Stephen Dodd.

Lara had nine birdies to finish with a six under par 65, matching Dodd's earlier effort at Donnafugata Golf Resort & SPA. Dodd had six birdies and an eagle and two bogeys on ninth and 11th in his 65.

Raphael Jacquelin of France and Daniel Gaunt of Australia were at six-under 66 in tied third, one ahead of three others at 67.

Former Ryder Cup Captain Colin Montgomerie gave himself every chance of a first top-ten finish for three years with a two under 69, but former Open Champion Paul Lawrie shot a one over 72. 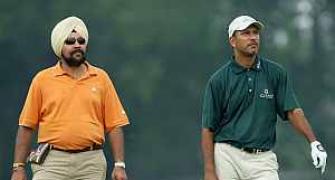 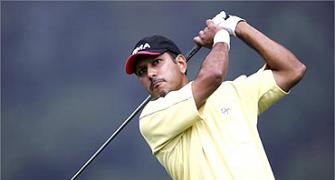 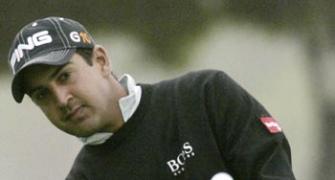 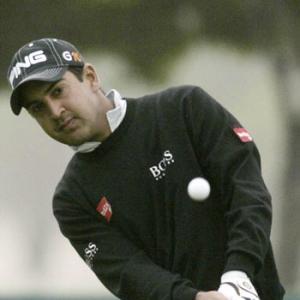